Douglas Craig Emhoff (born October 13, 1964) is an American lawyer and the current Second Gentleman of the United States, as the husband of Vice President Kamala Harris. As the first-ever husband of a U.S. vice president, Emhoff is the first second gentleman in American history. He is also the first Jewish spouse of a vice president.

Emhoff has worked with several law firms, most recently as a partner at DLA Piper. He is also a distinguished visiting professor at Georgetown University Law Center.

Emhoff was born in the New York City borough of Brooklyn, the son of Jewish parents, Barbara and Michael Emhoff. He has a brother Andy and a sister Jamie. From 1969 to 1981, he grew up in Matawan and Old Bridge Township, New Jersey, and attended Cedar Ridge High School, before moving with his family to California when he was 17 years old, where he graduated from Agoura High School. He earned a Bachelor of Arts degree from California State University, Northridge and a Juris Doctor from the USC Gould School of Law in 1990.

Emhoff is an entertainment litigator and began his career at Pillsbury Winthrop's litigation group. He moved to Belin Rawlings & Badal, a boutique firm, in the late 1990s. He opened his own firm with Ben Whitwell in 2000, which was acquired by Venable LLP in 2006. His clients included Walmart and Merck, and he became managing director of Venable's West Coast offices.

Emhoff joined DLA Piper as a partner in 2017, working at its Washington, D.C., and California offices. Following the announcement that his wife would be Joe Biden's running mate in the 2020 United States presidential election, Emhoff took a leave of absence from the firm. Following the Biden-Harris ticket's win, the campaign announced Emhoff would permanently leave DLA Piper prior to Inauguration Day to avoid conflict of interest concerns.

Second Gentleman of the United States 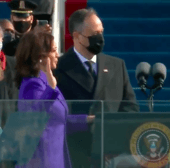 Harris taking her vice president oath of office with Emhoff at her side on January 20, 2021.

Emhoff's wife Kamala Harris was a candidate in the 2020 Democratic Party presidential primaries before dropping out in December 2019. In August 2020, Harris was announced as Joe Biden's running mate for the presidential election, making Emhoff the third man in U.S. history to be a spouse of the vice presidential candidate of a major party, following John Zaccaro (spouse of Geraldine Ferraro) and Todd Palin (spouse of Sarah Palin). When Harris assumed office, Emhoff became the first Second Gentleman of the United States. He is also the first Jewish spouse of a U.S. vice president.

In his role as Second Gentleman, Emhoff plans to focus on equal access to justice and legal representation.

In December of 2020, Georgetown University Law Center announced that Emhoff would join the school's faculty as a Distinguished Visitor and as a distinguished fellow of the school's Institute for Technology Law and Policy.

Emhoff was married for 16 years to Kerstin Emhoff, née Mackin. They have two children, Cole and Ella. He married Kamala Harris on August 22, 2014, in Santa Barbara, California, with Kamala's sister Maya Harris officiating. As of August 2019, Emhoff and Harris had an estimated net worth of $5.8 million. The couple resides in homes in Los Angeles, San Francisco and Washington, D.C. as of 2020.

All content from Kiddle encyclopedia articles (including the article images and facts) can be freely used under Attribution-ShareAlike license, unless stated otherwise. Cite this article:
Doug Emhoff Facts for Kids. Kiddle Encyclopedia.