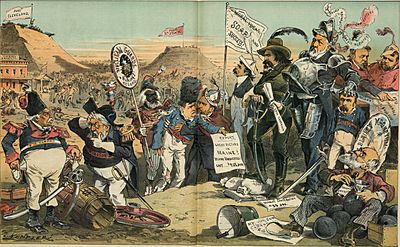 James G. Blaine finally gained the 1884 Republican nomination for U.S. president, in his third attempt – "Another victory like this and our money's gone!"

A Pyrrhic victory is a victory that inflicts such a devastating toll on the victor that it is tantamount to defeat. Someone who wins a Pyrrhic victory has also taken a heavy toll that negates any true sense of achievement or damages long-term progress.

A Pyrrhic victory may take place when the victorious army has lost a huge number of men or when the enemy army has reinforcements about to arrive which greatly outnumber the winning army and mean that the chances of a second victory are very low.

A Pyrrhic Victory is named after King Pyrrhus of Epirus, who won a battle against the Romans in 280 AD during which he lost a great deal of men and a lot of his Generals were also killed.

All content from Kiddle encyclopedia articles (including the article images and facts) can be freely used under Attribution-ShareAlike license, unless stated otherwise. Cite this article:
Pyrrhic victory Facts for Kids. Kiddle Encyclopedia.