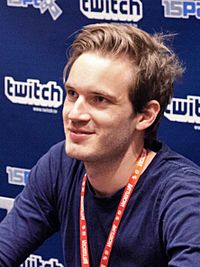 PewDiePie is an Internet celebrity and the second-most followed YouTuber.

An Internet celebrity (also known as a social media influencer) is a celebrity who has acquired or developed their fame and notability through the Internet. The rise of social media has helped people increase their outreach to a global audience. Internet celebrities may be recruited by companies for influencer marketing to advertise products to their fans and followers on their platforms. Internet celebrities often function as lifestyle gurus who promote a particular lifestyle or attitude. In this role, they may be crucial influencers or multipliers for trends in genres including fashion, technology, video games, politics, and entertainment.

Depending on their rise to fame, Internet celebrities may reach their audiences in different ways. Millions of people write online journals or blogs, but most fail to become Internet celebrities. In many cases, content does not reach a large audience and maybe intended for a smaller, niche audience. If a creator has or develops a distinctive personality, it may bring them more notoriety than their content does.

In some cases, people might rise to fame through a single viral event or viral video. The Internet allows videos, news articles, and jokes to circulate rapidly. Depending on its reach, the content may become an Internet meme. For example, Zach Anner, a comedian from Austin, Texas, gained worldwide attention after submitting a video to Oprah Winfrey's "Search for the Next TV Star" competition.

The Internet celebrity concept echoes Andy Warhol's famous quote about 15 minutes of fame. A more recent adaptation of Warhol's quote—possibly prompted by the rise of online social networking, blogging, and similar online phenomena—is the claim that "In the future, everyone will be famous to fifteen people" or, in some renditions, "On the Web, everyone will be famous to fifteen people." This quote, though attributed to David Weinberger, was said to have originated from the Scottish artist Momus. 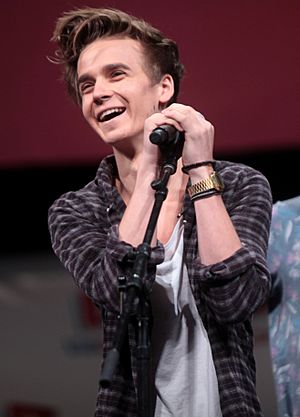 All content from Kiddle encyclopedia articles (including the article images and facts) can be freely used under Attribution-ShareAlike license, unless stated otherwise. Cite this article:
Internet celebrity Facts for Kids. Kiddle Encyclopedia.