The flag of the state of North Carolina bears the dates of the Mecklenburg Declaration of Independence (May 20, 1775) and of the Halifax Resolves (April 12, 1776). Both dates also appear on the Great Seal of North Carolina. 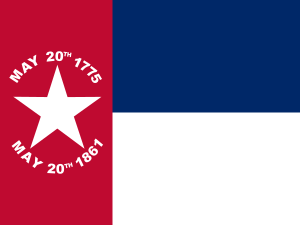 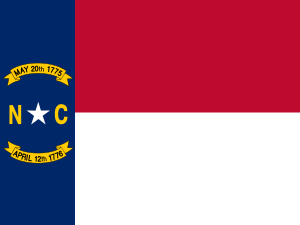 A former Confederate soldier and then state Adjutant General, Johnston Jones, introduced the bill which led the state legislature to adopt this flag in March 1885 to replace the flag that had been adopted on June 22, 1861, immediately following the state's declaration of secession from the Union on May 20, 1861.

The red field of the old flag was replaced by a blue field. This was the first and only flag formally representing the state of North Carolina and is not considered to be a Confederate Flag, but rather the first state flag.

During the American Civil War, secessionist leaders spoke of the Mecklenburg Declaration with reverence, attempting to connect it with the state's joining the Confederacy.

Confederate leader Jefferson Davis spoke to a Charlotte crowd in September 1864 saying "people of this section were the first to defy British authority and declare themselves free" encouraging them to continue backing the Confederacy's civil war effort.

Salute to the flag

The General Assembly of North Carolina adopted an official salute to the flag in 2007. It reads:

All content from Kiddle encyclopedia articles (including the article images and facts) can be freely used under Attribution-ShareAlike license, unless stated otherwise. Cite this article:
Flag of North Carolina Facts for Kids. Kiddle Encyclopedia.