Juliana of the Netherlands facts for kids

Juliana was the only child of Queen Wilhelmina and Prince Henry. From birth she was heir presumptive to the Dutch throne. She was educated privately. In 1937, she married Prince Bernhard of Lippe-Biesterfeld with whom she had four children.

She reigned for nearly 32 years. Her reign saw the decolonization of Dutch East Indies (now Indonesia) and Suriname and their independence from the Kingdom of the Netherlands. Upon her death at the age of 94, she was the longest-lived former reigning monarch in the world.

On 30 April 1980, her 71st birthday, Queen Juliana abdicated and her eldest daughter succeeded her. Juliana remained active in numerous charitable causes until well into her eighties. 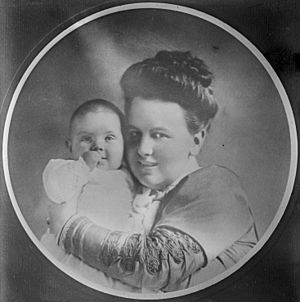 Juliana was born at Noordeinde Palace in The Hague, the only daughter of the reigning Dutch monarch, Queen Wilhelmina. Her father was Duke Henry of Mecklenburg-Schwerin. Juliana's birth assured the royal family's survival. 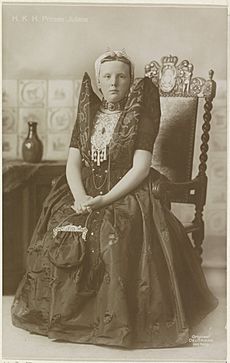 Princess Juliana in an Axel costume in 1922

As the Dutch constitution specified that Princess Juliana should be ready to succeed to the throne by the age of eighteen, her education proceeded at a faster pace than that of most children. After five years of primary education, the Princess received her secondary education (to pre-university level) from private tutors.

On 30 April 1927, Princess Juliana celebrated her eighteenth birthday. Under the constitution, she had officially come of age and was entitled to assume the royal position, if necessary. Two days later her mother installed her in the "Raad van State" ("Council of State").

In the same year, the Princess enrolled as a student at the University of Leiden. In her first years at university, she attended lectures in sociology, jurisprudence, economics, history of religion, parliamentary history, and constitutional law. In the course of her studies she also attended lectures on the cultures of Suriname and the Netherlands Antilles, international affairs, international law, history, and European law. She graduated from the university in 1930 with a bachelor's degree in international law. 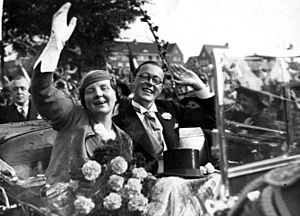 In the 1930s, Queen Wilhelmina began a search for a suitable husband for her daughter. At the time, the House of Orange-Nassau was one of the most strictly religious royal families in the world, and it was very difficult to find a Protestant prince who suited their standards.

At the 1936 Winter Olympics in Bavaria, she met Prince Bernhard of Lippe-Biesterfeld, a young German aristocrat, his rank and religion were suitable; so Princess Juliana's royal engagement was arranged by her mother. Princess Juliana fell deeply in love with her fiancé, a love that was to last a lifetime. The astute Queen Wilhelmina, by then the richest woman in the world, left nothing to chance. Wilhelmina had her lawyers draw up a prenuptial agreement that specified exactly what the German-born prince could and could not do, and what money he would receive from the royal estate. The couple's engagement was announced on 8 September 1936. 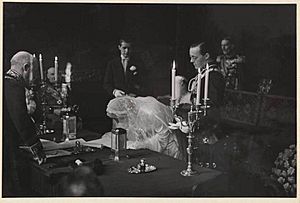 The wedding announcement divided a country that mistrusted Germany under Adolf Hitler. Prior to the wedding, on 24 November 1936, Prince Bernhard was granted Dutch citizenship and changed the spelling of his names from German to Dutch. They married in The Hague on 7 January 1937, the date on which Princess Juliana's grandparents, King William III and Queen Emma, had married fifty-eight years earlier. The civil ceremony was held in The Hague Town Hall and the marriage was blessed in the Great Church (St. Jacobskerk), likewise in The Hague. The young couple moved into Soestdijk Palace in Baarn.

On 12 May 1940, during the invasion of the Netherlands by Germany in the Second World War, Prince Bernhard and Princess Juliana were evacuated to the United Kingdom to be followed the following day by Queen Wilhelmina and the Dutch Government, who set up a government in exile. The princess remained there for a month before taking the children to Ottawa, the capital of Canada, where she resided at Stornoway in the suburb of Rockcliffe Park. Her mother and husband remained in Britain with the Dutch government-in-exile. 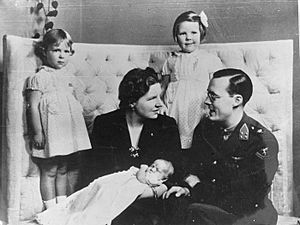 Princess Juliana with her husband and daughters in Ottawa in 1943

When her third child, Princess Margriet, was born, the Governor General of Canada Lord Athlone granted Royal Assent to a special law declaring Princess Juliana's rooms at the Ottawa Civic Hospital as extraterritorial in order that the infant would have exclusively Dutch, not dual nationality. Had these arrangements not been made, Princess Margriet would not be in the line of succession.

The Canadian government flew the Dutch tricolour flag on parliament's Peace Tower while its carillon rang out with Dutch music at the news of Princess Margriet's birth. Prince Bernhard, who had remained in London with Queen Wilhelmina and members of the exiled Dutch government, was able to visit his family in Canada and be there for Margriet's birth. Princess Juliana's genuine warmth and the gestures of her Canadian hosts created a lasting bond, which was reinforced when Canadian soldiers fought and died by the thousands in 1944 and 1945 to liberate the Netherlands from the Nazis.

She returned with Queen Wilhelmina by a military transport plane to the liberated part of the Netherlands on 2 May 1945, rushing to Breda to set up a temporary Dutch government. Once home, she expressed her gratitude to Canada by sending the city of Ottawa 100,000 tulip bulbs. Princess Juliana of the Netherlands erected a wooden lectern and brass plaque which is dedicated in thanks to the St. Andrew's Presbyterian Church (Ottawa) for their hospitality during Princess Juliana's residence in Ottawa during the Second World War. 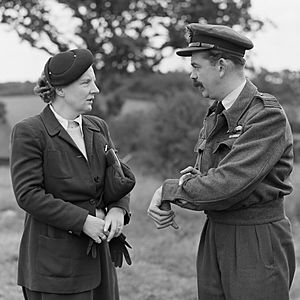 On 24 June 1945, she sailed on the RMS Queen Elizabeth from Gourock, Scotland, to the United States, listing her last permanent residence as London, England. The following year (1946), Juliana donated another 20,500 bulbs, with the request that a portion of these be planted at the grounds of the Ottawa Civic Hospital where she had given birth to Margriet. At the same time, she promised Ottawa an annual gift of tulips during her lifetime to show her lasting appreciation for Canada's war-time hospitality. Each year Ottawa hosts the Canadian Tulip Festival in celebration of this gift.

On 2 May 1945, Princess Juliana was returned with her mother to Dutch soil. Juliana took part in the post-war relief operation for the people in the northern part of the country who had suffered through starvation during the Hunger Winter of 1944–1945, which had taken the lives of many of her countrymen. She was very active as the president of the Dutch Red Cross and worked closely with the National Reconstruction organization. Her down-to-earth manner endeared her to her people so much that a majority of the Dutch people would soon want Queen Wilhelmina to abdicate in favour of her daughter. In the spring of 1946 Princess Juliana and Prince Bernhard visited the countries that had helped the Netherlands during the occupation. 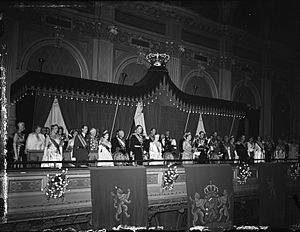 Wilhelmina's increasingly declining health made it increasingly difficult for her to perform her duties. Juliana was forced to take over as regent from 14 October to 1 December 1947. Wilhelmina seriously considered abdicating in favour of Juliana at the end of 1947, but Juliana urged her mother to stay on the throne so she could celebrate her diamond jubilee in 1950. However, Wilhelmina was forced to relinquish her royal duties to Juliana once again on 4 May 1948.

The independence of Indonesia, which saw more than 150,000 Dutch troops stationed there as decolonization force, was regarded as an economic disaster for the Netherlands. With the certain loss of the prized colony, the queen announced her intention to abdicate, doing so on 4 September 1948. Two days later, with the eyes of the world upon her, Juliana was sworn-in and inaugurated as monarch at a ceremony held in the Nieuwe Kerk in Amsterdam, becoming the 12th member of the House of Orange to rule the Netherlands. 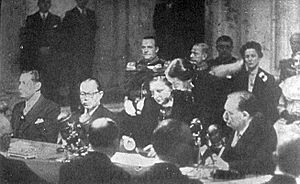 On 27 December 1949 at Dam Palace in Amsterdam, Queen Juliana signed the papers that recognised Indonesian sovereignty over the former Dutch colony. She became Hoofd der Unie (Head of the Union) of the Netherlands-Indonesian Union (1949-1956).

Juliana's efforts were to connect with her people. She often appeared in public dressed like any ordinary Dutch woman, and preferred to be addressed as "Mevrouw" (Dutch for "Mrs.") rather than her formal title of "majesty". She also began riding a bicycle for exercise and fresh air.

Although the bicycle and the down-to-earth manners suggest a simple life style, the Dutch royal court of the 1950s and 1960s was still a splendid affair with chamberlains in magnificent uniforms, gilded state coaches, visits to towns in open carriages and lavish entertaining in the huge palaces. At the same time the queen began visiting the citizens of the nearby towns and, unannounced, would drop in on social institutions and schools. 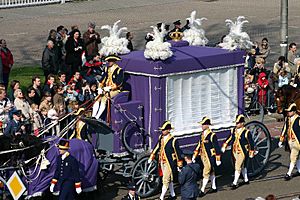 The funeral carriage of HM Queen Juliana of The Netherlands 2004

From the mid-1990s, Juliana's health declined and she also suffered the progressive onset of dementia. Juliana did not appear in public after this time. At the order of the Royal Family's doctors, Juliana was placed under 24-hour care. Prince Bernhard said in a television interview in 2001 that the former Queen was no longer able to recognise her family and that she had been suffering from Alzheimer's disease for several years.

Juliana died in her sleep on 20 March 2004, several weeks before her 95th birthday, at Soestdijk Palace in Baarn from complications of pneumonia, seventy years to the day after her grandmother, on 30 March 2004 she was interred beside her mother in the royal vaults under the Nieuwe Kerk in Delft. Juliana's husband Prince Bernhard died eight months later aged 93, on 1 December 2004; his remains were placed next to hers.

In 2009, an exhibition of portraits of Juliana, and objects from her life, was held at the Het Loo Palace to mark the centenary of her birth. 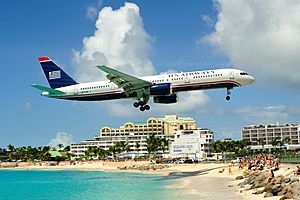 All content from Kiddle encyclopedia articles (including the article images and facts) can be freely used under Attribution-ShareAlike license, unless stated otherwise. Cite this article:
Juliana of the Netherlands Facts for Kids. Kiddle Encyclopedia.