Cabinet of Canada facts for kids 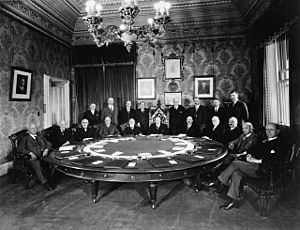 The Cabinet of Canada (French: Cabinet du Canada) is a body of ministers of the Crown that, along with the Canadian monarch, and within the tenets of the Westminster system, forms the government of Canada.

For practical reasons, the Cabinet is informally referred to either in relation to the prime minister in charge of it or the number of ministries since Confederation. The current cabinet is the Trudeau Cabinet, which is part of the 29th Ministry. The interchangeable use of the terms cabinet and ministry is a subtle inaccuracy that can cause confusion.

The government of Canada, formally referred to as Her Majesty's Government, is defined by the constitution as the Queen acting on the advice of her Privy Council; what is technically known as the Queen-in-Council, or sometimes the Governor-in-Council, referring to the governor general as the Queen's stand-in.

One of the main duties of the Crown is to appoint as prime minister the individual most likely to maintain the confidence of the House of Commons; this is usually the leader of the political party with a majority in that house, but when no party or coalition holds a majority (referred to as a hung parliament), or similar scenario, the governor general's judgement about the most suitable candidate for prime minister must be brought into play. The prime minister thereafter heads the Cabinet. The Queen remains fully briefed through regular communications from her Canadian ministers and holds audience with them whenever possible. 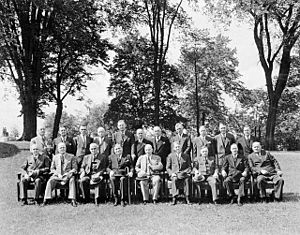 In the context of constitutional monarchy and responsible government, the ministerial advice tendered is typically binding, though it is important to note that, despite appearances to the contrary, the Royal Prerogative belongs to the Crown, not to any of the ministers, and the royal and vice-royal figures may unilaterally use these powers in exceptional constitutional crisis situations.

The Liberal Party of Canada won the federal election of October 19, 2015 with a majority of seats in the House of Commons. The Cabinet was sworn-in on November 4, with Justin Trudeau appointed as prime minister.

Ministers are listed according to the Canadian order of precedence:

All content from Kiddle encyclopedia articles (including the article images and facts) can be freely used under Attribution-ShareAlike license, unless stated otherwise. Cite this article:
Cabinet of Canada Facts for Kids. Kiddle Encyclopedia.