List of states with limited recognition facts for kids 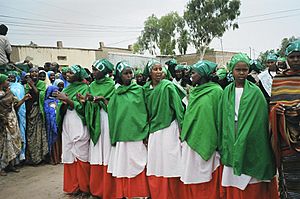 Women in Somaliland, wearing the colors of the Somaliland flag.

In international law a political entity needs to fulfill different criteria to become a state: One of these criteria is that other states must recognize it as a state. If more states recognize it, becoming a de jure sovereign state will be easier.

Many of the territories listed below broke off (separated themselves) from their original parent state, and so they are often referred to as "break-away" states. They may have some military protection and informal diplomatic representation abroad. Another state may help them avoid forced reincorporation into its original state.

Partially recognized states with de facto control over their territory

United Nations member states that are only partially recognized by the totality of the other UN members are not listed here. (For example, 39 countries do not recognize Israel.)

Unrecognized states with de facto control over their territory

Created by the Republic of South Africa from its own territory

These regimes had control over the territory of a country for which most other states recognized a different government as being the legitimate government:

All content from Kiddle encyclopedia articles (including the article images and facts) can be freely used under Attribution-ShareAlike license, unless stated otherwise. Cite this article:
List of states with limited recognition Facts for Kids. Kiddle Encyclopedia.