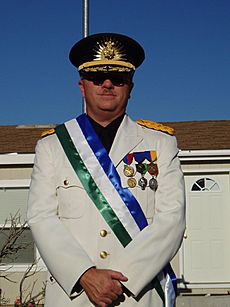 Micronations are countries started by one or a group of people which is not noticed by the United Nations. These countries are mostly used in people's heads, or on the internet.

People make micronations for lots of reasons. Some are to show they do not like their main country (for example the United Kingdom), or if they want to make money, or to use it as a place for themselves.

Some micronations play in competitions.

The biggest football organisation for micronations is known as the MFA (Micronational Football Association), founded by Joe Foxon in 2009. It has 13 micronations from 7 countries as members. It makes a competition every 4 years called the MFA World Cup for all the micronations in the world to play in. The first World Cup will be in Southern England in 2013.

Every year there is a singing competition called the MicroVision Song Contest. Micronations make a song and put it on the internet, and then other micronations vote for the best song. The winner then makes the next one.

All content from Kiddle encyclopedia articles (including the article images and facts) can be freely used under Attribution-ShareAlike license, unless stated otherwise. Cite this article:
Micronation Facts for Kids. Kiddle Encyclopedia.