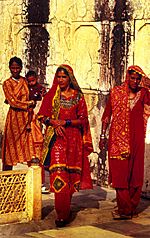 Dupatta (Hindi: दुपट्टा, Urdu: دوپٹہ) is a long scarf that is essential to many South Asian women's suits. Some "dupatta suits" include the salwar kameez, the trouser suit, and the kurta. The dupatta is also worn over the Hindu outfit of lehenga or ghaghra- choli. The dupatta has long been a symbol of modesty in South Asian dress. It is traditionally worn across both shoulders. However, the dupatta can also be worn like a cape around the entire torso. The material for the dupatta varies according to the suit: cotton, georgette, silk, chiffon, and more. The other names for dupatta are chunri and chunni (sometimes shortened to 'unni' by many Gujaratis).

There are various modes of wearing the unsewn dupatta. When not draped over the head in the traditional style, it is usually worn with the middle portion of the dupatta resting on the chest like a garland with both ends thrown over each respective shoulder. When the dupatta resting is worn along with the salwar-kameez it is casually allowed to flow down the front and back.

The use of the dupatta has definitely undergone a metamorphosis over time. In current fashions, the dupatta is frequently draped over one shoulder, and even over just the arms. Another recent trend is the short dupatta often seen with kurtas and Indo-Western clothing. Essentially, the dupatta is often treated as an accessory in current urban fashion. Nevertheless, the dupatta remains an integral part of Indian clothing and Pakistani clothing. Its nowadays a blend of fashion with the tradionalism. 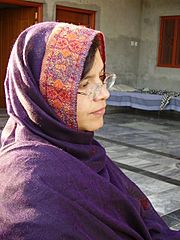 A Pakistani Woman with dupatta

All content from Kiddle encyclopedia articles (including the article images and facts) can be freely used under Attribution-ShareAlike license, unless stated otherwise. Cite this article:
Dupatta Facts for Kids. Kiddle Encyclopedia.