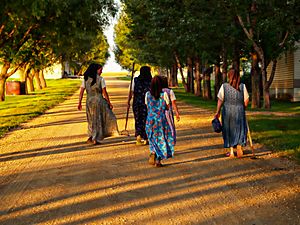 Hutterite women return from working in the fields at sunset.

Hutterites are a group of Protestanŧ Christians. They are an anabaptist movement; they think believers should be baptized (a second time). Their movement was founded by Jacob Hutter who lived in the 16th century. The main difference to the Mennonites is that they think the Bible should be read literally. They also share everything they have; there is no private property. Within the Hutterites, there are a few different groups. Some of the groups are more liberal than others. Usually, the different groups also have different leaders.

Today, there are about 50.000 Hutterites; most of them live in the Canada and the United States. Like the Amish they still speak a dialect of German. In 2005, there were about 465 settlements, with 60 to 150 people each. The people who emigrated to the US or Canada had one of the following family names: Decker, Entz, Glanzer, Gross, Hofer, Kleinsasser, Knels, Mändel, Stahl, Tschetter, Waldner, Walther, Wipf, Wollmann, or Wurz.

All content from Kiddle encyclopedia articles (including the article images and facts) can be freely used under Attribution-ShareAlike license, unless stated otherwise. Cite this article:
Hutterites Facts for Kids. Kiddle Encyclopedia.