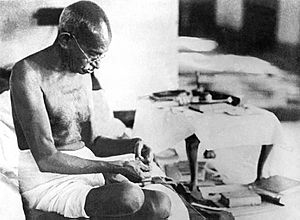 Mahatma Gandhi spinning yarn in 1942. Gandhi believed in a life of simplicity and self-sufficiency.

Simple living means to choose a lifestyle where you own fewer things and focus on what you need instead of what you want. People choose this lifestyle for many different reasons, often based on their views on health, economy, or philosophy, or because they want to protect the environment. Some people do it simply because it suits them better.

Some famous people who chose the simple living lifestyle are Francis of Assisi, Leo Tolstoy, Rabindranath Tagore, Albert Schweitzer, Mohandas Gandhi, and Henry David Thoreau. The Amish live simply by using only things that are described in the Bible.

All content from Kiddle encyclopedia articles (including the article images and facts) can be freely used under Attribution-ShareAlike license, unless stated otherwise. Cite this article:
Simple living Facts for Kids. Kiddle Encyclopedia.