Abu'l Hasan Yamīn ud-Dīn Khusrau (1253–1325 AD), better known as Amīr Khusrau Dehlavī, was an Indian Sufi singer, musician, poet and scholar who lived under the Delhi Sultanate. He was an iconic figure in the cultural history of the Indian subcontinent. He was a mystic and a spiritual disciple of Nizamuddin Auliya of Delhi, India. He wrote poetry primarily in Persian, but also in Hindavi. A vocabulary in verse, the Ḳhāliq Bārī, containing Arabic, Persian and Hindavi terms is often attributed to him. Khusrau is sometimes referred to as the "voice of India" or "Parrot of India" (Tuti-e-Hind), and has been called the "father of Urdu literature."

Khusrau is regarded as the "father of qawwali" (a devotional form of singing of the Sufis in the Indian subcontinent), and introduced the ghazal style of song into India, both of which still exist widely in India and Pakistan. Khusrau was an expert in many styles of Persian poetry which were developed in medieval Persia, from Khāqānī's qasidas to Nizami's khamsa. He used 11 metrical schemes with 35 distinct divisions. He wrote in many verse forms including ghazal, masnavi, qata, rubai, do-baiti and tarkib-band. His contribution to the development of the ghazal was significant. 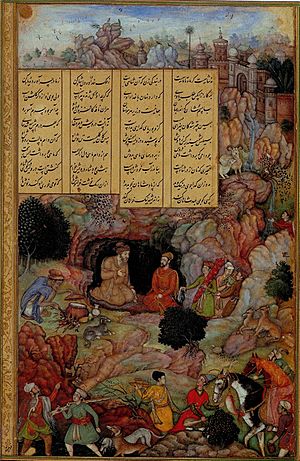 Alexander Visits the Sage Plato, from the Khamsa of Amir Khusrau

All content from Kiddle encyclopedia articles (including the article images and facts) can be freely used under Attribution-ShareAlike license, unless stated otherwise. Cite this article:
Amir Khusrau Facts for Kids. Kiddle Encyclopedia.