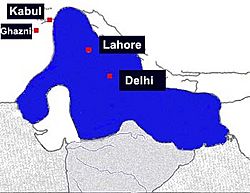 Delhi Sultanate during the reign of Iltutmish

Shams-ud-din Iltutmish (died 1236) was the third Muslim Turkic sultan of the Sultanate of Delhi. He was the third ruler of the Mamluk dynasty (or Slave dynasty). He was married to the daughter of Qutb-ud-din Aibak. He became the ruler after fighting against Qutb-ud-din's son. He is said to be the greatest ruler of the slave kings. He was a member of the Ilebar tribe. The first thing he did after becoming a sultan was make his kingdom larger. He also shifted his capital from Lahore to Delhi. He had to defend his empire against Mongol invasions. He also had to deal with Rajputs. Iltutmish stopped the Mongol attack in 1221 A.D led by Chenghiz Khan. He completed the Qutb Minar which was started by Qutb-ud-din Aibak. He also built the Quwat-ul-Islam mosque in Delhi.He died in 1236 A.D. He did not think his sons would be good rulers. He was succeeded by his daughter, Razia Sultan (also called Radiyya or Raziyya), as the next ruler of Delhi.

All content from Kiddle encyclopedia articles (including the article images and facts) can be freely used under Attribution-ShareAlike license, unless stated otherwise. Cite this article:
Shams-ud-din Iltutmish Facts for Kids. Kiddle Encyclopedia.