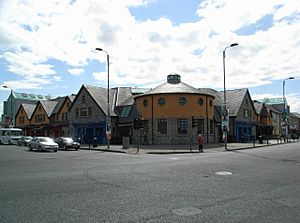 Crumlin (Irish: Croimghlinn, meaning Crooked Glen) is a suburb in Dublin, Ireland. It is the site of Ireland's largest children's hospital.

Crumlin covers the area from the River Poddle near the KCR(kimmage cross roads) to Sundrive Rd and Crumlin Cross at The Submarine bar to Crumlin Village the Drimnagh Road, to Bunting Road, Crumlin Road then along the Grand Canal from Rialto Bridge to Sallys Bridge and is situated next to the city centre, on the Southside of Dublin city. Neighbouring areas include Walkinstown, Perrystown, Drimnagh, Terenure, and Kimmage. Crumlin is contained within postal district Dublin 12.

Crumlin gets its name from the crooked valley known as Lansdowne Valley. The valley was formed by glacial erosion in the distant past and is now bisected by the River Camac. The valley is situated behind Drimnagh and is largely made up of recreational parkland.

During the medieval period, Dublin was surrounded by manorial settlements comprising church, graveyard, manor house, motte and bailey, farms and cottages. These settlements grew into a network of villages around Dublin creating stability and continuity of location. Crumlin Village developed as an Anglo-Norman settlement soon after the Norman Conquest in 1170, (although the circular configuration of the old graveyard of Saint Mary’s in the village suggests pre-Norman associations), and has survived through the centuries to become the village of today. The Old Saint Mary's Church stands on the site of a 12th-century church of the same dedication, and a succession of churches occupied the site down through the centuries to the present day.

In 1193, King John (the then Prince of Moreton) gave the Crumlin church to form one prebend in the collegiate church of Saint Patrick. When the main body of the present old church was rebuilt in 1817, the old tower of a much earlier origin was preserved.

Crumlin, along with Saggart, Newcastle, Lyons and Esker (Lucan) was constituted a royal manor by King John sometime before the end of his reign in 1216. The English noble families of the time had strong links with Ireland, particularly in Leinster. For example, William Fitz John of Harptree was a lord of some significance in Somerset and likely to have served in Ireland under King John. At the beginning of the reign of King Henry III, Fitz John acquired the custody of the lands of William de Carew and held the royal manor of Crumlin, although he did not establish family roots in Ireland.

As the church was the nucleus of life on the manor in medieval times, we may with confidence place the centre of Crumlin’s medieval settlement in the area of Crumlin Village. This has been confirmed by recent archaeological excavations in the area of Saint Mary’s and the site of the former motte and earthworks on which the new St. Mary's Church was built. 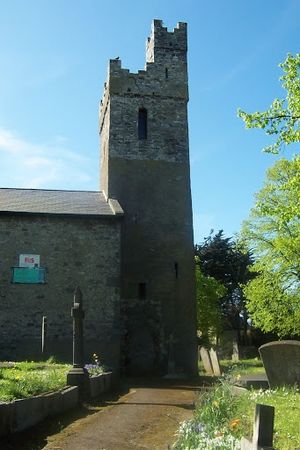 Some of the local amenities in Crumlin, such as Pearse College on Clogher Road and Ceannt park, are named after some of the 1916 Rebels who had a training camp in nearby Kimmage at Sundrive crossroads.

Crumlin is home to Our Lady's Children's Hospital, Crumlin, the largest children's hospital in the country. A great many roads are named after some of Ulsters towns and various Irish towns associated with pagan or religious sites/towns. There's a statue of the warrior Cu Chuillain situated opposite St Marys Church at the junction with Bunting road. He is said to have originated from the area and is described as a partially wooded landscape, the crooked glen being one of its main features. Today this valley can be seen behind Drimnagh Castle and was wild until recently turned into a golf course, albeit one that did not ruin its features but tried to use them in the main.

Notable people who have lived in or been associated with the area include:

When the RTÉ drama Fair City launched in 1989, Exterior shots were filmed in the Crumlin-Drimnagh area for the first three seasons of the programme (1989–93) until season four launched in 1994, The year the set in RTÉ, Donnybrook was completed. Locations used were as follows: Entrance road onto Copeland Close - Clogher Road Junction Copeland Close - Saul Road Ragnall Place - Derry Drive Copeland Drive (this is the main location in the series where McCoy's Pub; The hungry pig diner; Vino's and the Spar are located) - Old County Road Carrigstown Garda Station - Garda Station, Crumlin Road Carrigstown Comprehensive Secondary School - St. Kevin's College CBS, Clogher Road Carrigstown Road - Windmill Road In 1994, Replicas of the exterior of the houses used in the series were constructed in the Donnybrook studios. It is still filmed there to this day.

All content from Kiddle encyclopedia articles (including the article images and facts) can be freely used under Attribution-ShareAlike license, unless stated otherwise. Cite this article:
Crumlin, Dublin Facts for Kids. Kiddle Encyclopedia.