Eric Robin Bell (born 3 September 1947 in East Belfast, Northern Ireland) is a Northern Irish rock and blues musician, best known as a founding member and the original guitarist of the rock group Thin Lizzy from 1969 to 1973. After his time in Thin Lizzy, he briefly fronted his own group before joining The Noel Redding Band in the mid-1970s. He has since released several solo albums and performs regularly with a blues-based trio, the Eric Bell Band.

Bell began his career with local groups around the Belfast area, including the last incarnation of Them to feature Van Morrison, between September and October 1966. He also played with a number of other bands including Shades of Blue, The Earth Dwellers and The Bluebeats, before joining an Irish showband named The Dreams. He left in 1969 having tired of the showband format, and at the end of that year he formed a band with local musicians Phil Lynott, Eric Wrixon and Brian Downey. Bell named the group Thin Lizzy, after Tin Lizzie, a robot character in The Dandy comic. 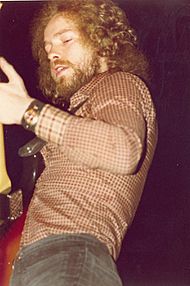 Organist Eric Wrixon left Thin Lizzy after a few months, and the remaining trio later secured a contract with Decca Records. As lead guitarist, Bell played on Thin Lizzy's first three albums Thin Lizzy, Shades of a Blue Orphanage and Vagabonds of the Western World, as well as their hit single "Whiskey in the Jar". He co-wrote a number of songs with Lynott and Downey, including "The Rocker" which became a live favourite throughout the band's career. He also composed one song on his own, "Ray Gun", from their first album, Thin Lizzy.

Although Thin Lizzy gained in popularity during the early 1970s, the pressures of recording, touring and the excesses of the rock star lifestyle began to take their toll. He left the band after a New Year's Eve concert in 1973, after throwing his guitar into the air in the middle of the concert, pushing the amplifiers into the audience and storming off stage. He stated later that he had no regrets about leaving: "I really had to leave because of ill-health. It was exhaustion, and the majority of things that were available to me... I couldn't really handle it." He was temporarily replaced by Gary Moore.

In 1974, after a brief period fronting his own Eric Bell Band, Bell was recruited by ex-Jimi Hendrix sideman Noel Redding, along with guitarist/singer Dave Clarke and drummer Les Sampson, to form The Noel Redding Band. Bell was initially unsure of the musical direction Redding was taking, but went on to record two albums with the group before they split in 1976. A third album of unused tracks was released in 1995. Bell composed the song "Love and War" for the second album, Blowin'. 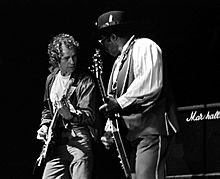 In 1980, Bell reunited with Thin Lizzy to record a tribute song to Jimi Hendrix, "Song for Jimmy" [sic], which was released as an orange flexi disc and given away with Flexipop in August 1981. It was later included on Thin Lizzy's Vagabonds, Kings, Warriors, Angels box set in 2002, although much of Eric Bell's lead guitar work was missing from this version as the relevant master tapes could not be found. Bell also appeared as a guest on Thin Lizzy's final tour in 1983, and the accompanying live album, Life.

Bell has continued to perform and record with the Eric Bell Band throughout the 1990s and 2000s, releasing several albums. He has also recorded with the Barrelhouse Brothers.

In 2005, he joined Gary Moore onstage to perform "Whiskey in the Jar" at the Phil Lynott tribute concert "The Boy Is Back in Town" in the Point Theatre, Dublin. This was released on a DVD called One Night in Dublin: A Tribute to Phil Lynott. In 2010, Bell moved from London where he had lived for many years to his new home in West Cork, Ireland.

All content from Kiddle encyclopedia articles (including the article images and facts) can be freely used under Attribution-ShareAlike license, unless stated otherwise. Cite this article:
Eric Bell Facts for Kids. Kiddle Encyclopedia.