The Beacon Theatre is a historic theater at 2124 Broadway (at West 74th Street) on Broadway in Upper West Side, Manhattan, New York City. The 2,894-seat, three-tiered theatre was designed by Chicago architect Walter W. Ahlschlager and opened in 1929 as a movie palace for motion pictures and vaudeville. Today it is one of New York's leading live music and entertainment venues, under the management of the Madison Square Garden Company. The theater was the site of the 2011, 2012, and 2016 Tony Awards.

The Beacon Theatre was originally conceived by film producer Herbert Lubin in 1926 as part of a projected chain of deluxe New York City movie palaces. The planned Roxy Theatre Circuit was to be operated by Lubin and Samuel L. "Roxy" Rothafel with the famous Roxy Theatre as its flagship. Planned as the Roxy Midway Theatre, the future Beacon was designed by Walter W. Ahlschlager of Chicago, the architect of the 6000 seat Roxy, as a smaller mate to the larger Times Square theater. However, the collapse of Lubin's fortunes doomed the Roxy scheme and the Midway was never opened. The nearly completed theater sat vacant for a time and was eventually acquired by Warner Theatres to be a first-run showcase for Warner Bros. films on the Upper West Side of Manhattan. The renamed Warner's Beacon Theatre opened on December 24, 1929. Designed as a silent film showplace, the theater's delayed opening featured a talking picture (Tiger Rose with Lupe Vélez), silent films having already become obsolete.

Later operated by Brandt Theaters, the Beacon continued as a primarily first-run movie theater into the early 1970s. In 1974, Steven Singer bought the theater to present live pop concerts promoted by Stephen Metz. They were followed by Marvin Getlan and Allen Rosoff who bought the theater in 1976 and continued its new life as a major presenter of live concerts, including a series of 1976 concerts by the Grateful Dead. In November 1977 the Beacon hosted a performance of Erik Satie's symphonic drama Socrate in tribute to the mobile artist Alexander Calder, featuring a recreation of Calder's set for a 1936 production of the work.

It was added to the National Register of Historic Places in 1982.

In 1987, an effort to convert the theater into a nightclub was blocked in court on the grounds that it would irreparably damage the theater's historic and protected architecture. Subsequently, the theater underwent a revival in its concert hall business, filling New York's low-to-mid-sized venue notch between the larger Radio City Music Hall and various smaller clubs and ballrooms. The Madison Square Garden Company began operating the Beacon in 2006.

In November 2006, the theater began a 20-year lease by Cablevision, which also leases Radio City Music Hall and owns Madison Square Garden. The company announced a planned $10 million renovation of the theater. 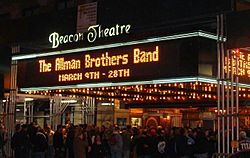 In late September 1989, the Allman Brothers Band played four shows at the Beacon Theatre. They played 10 nights in spring 1992, and played from 8 to 19 shows each spring in the nineteen following years, except for in 2010, when the band could not play at the theatre.

They chose to record a live album at the theatre in March 2000, and released Peakin' at the Beacon on November 14, 2000 on the Epic label.

In 2009, the Allman Brothers Band celebrated its 40th anniversary by inviting famous musical guests from an impressive array of genres to perform with them at the Beacon Theatre. Dedicated to the band's founder and original frontman, Duane Allman, the engagement lasted three weeks rather than three-days, as in previous years. Some of the invitees included Eric Clapton, Boz Scaggs, and Levon Helm, formerly of The Band, who arrived the first day with his own drum kit. Clapton had invited Duane Allman to perform with Clapton's band, Derek and the Dominos, on its 1970 album Layla and Other Assorted Love Songs'

In January 2010, the Beacon's management announced it would be unable to accommodate the Allman Brothers Band that year because it had booked an extended run of a new Cirque du Soleil production, forcing the band to move its annual New York engagement to a new venue, the United Palace Theater. According to The New York Times, at that time the Allmans had played "190 shows over the past 20 years" at the Beacon, beginning in 1989. 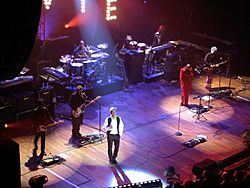 With its superior acoustics designed for the musical accompaniment of pre-sound moving pictures, the theater was long the leading Upper West Side venue for R&B, pop, jam bands and rock concerts.

Steely Dan has had many residencies at the theatre.

Queen performed numerous concerts as part of their A Night at the Opera Tour in 1976.

On 19 February 2009, it was at the Beacon that Leonard Cohen played his first American concert in fifteen years.

Toward the end of his annual tours, Bob Dylan often performs several concerts at the Beacon Theater. It was the case notably in 2014, in 2017 and in 2018.

The theater's stage has supported political debates, gospel choirs, and a wide variety of dramatic productions. VH-1 broadcast its popular production Divas Live from there. Many of George Carlin's HBO comedy specials were broadcast from or filmed there. Conan O'Brien taped his Late Night 10th anniversary special at the theater in 2003, and made a brief return to New York with a week's worth of shows for his current series, Conan, from October 31 to November 3, 2011. In the 2000s, the Beacon Theater often offers light comedy geared toward African-American audiences, making it a favorite destination for troupes working the Chitlin Circuit. The 2008 IMAX film of a live concert by the Rolling Stones, Shine a Light, directed by Martin Scorsese was filmed at the Beacon Theatre. Progressive rock band Dream Theater performed at the theatre in August 2009 on its Black Clouds & Silver Linings tour and again in October 2011 during the A Dramatic Turn of Events tour.

In 2004, the theater received the Latin diva Thalía. She performed with her first tour High Voltage Tour.

Duran Duran recorded a live concert here on August 31, 1987, called Live at the Beacon Theatre released as a download by EMI on September 27, 2010. The show was a charity event for The Association To Benefit Children.

The band Hot Tuna has performed annually, in late November or early December, at the Beacon since 1996.

Joan Baez celebrated her 75th birthday with a concert at the theatre on January 27, 2016, which was broadcast on PBS's Great Performances and released on CD and DVD. She also included the theatre in her world-wide Fare Thee Well tour with three concerts in September 2010 and in May 2019.

The sixth biennial "Night of Too Many Stars" took place at the Beacon on February 28, 2015. Hosted by Jon Stewart, the event featured numerous stars of comedy, film, and television, with the goals of raising funds for autism research and support services and promoting autism awareness.

The film Suicide Squad premiered at the Beacon Theatre on August 1, 2016.

Trey Anastasio (Phish, TAB) performed the first ever digital residency amidst the pandemic year of 2020.

The Beacon's ornate neo-Grecian interior features 30 ft-tall (9.1 m) Greek goddesses flanking the proscenium arch of its curtainless stage, which can rise from its basement level carrying a full classical orchestra. Under its marquee is an exterior lobby with tile flooring extending to the sidewalk along Broadway between 74th and 75th Streets, across from the Beaux-Arts Ansonia Hotel. Entry is gained through its bronze-doored vestibule into an opulent two-story circular lobby. White marble floors give way to mahogany bars on both the orchestra and mezzanine levels, and two more levels provide access to both the foot and top of its steeply inclined upper balcony. Exquisite detailing abounds throughout, including elaborate gilded plaster moldings, polished hardwood, and brass staircase rails. Corridor murals depict atmospheric Eastern scenes of trading caravans complete with elephants, camels and other animals.

All content from Kiddle encyclopedia articles (including the article images and facts) can be freely used under Attribution-ShareAlike license, unless stated otherwise. Cite this article:
Beacon Theatre (New York City) Facts for Kids. Kiddle Encyclopedia.