The Ansonia facts for kids

The Ansonia is a building on the Upper West Side of New York City, located at 2109 Broadway, between West 73rd and West 74th Streets. It was originally built as a residential hotel by William Earle Dodge Stokes, the Phelps-Dodge copper heir and shareholder in the Ansonia Clock Company, and it was named for his grandfather, the industrialist Anson Greene Phelps. In 1897, Stokes commissioned French architect Paul Emile Duboy to design the grandest hotel in Manhattan.

Stokes would list himself as "architect-in-chief" for the project and hired Duboy, a sculptor who designed and made the ornamental sculptures on the Soldiers' and Sailors' Monument, to draw up the plans. New Orleans architect Martin Shepard served as draftsman and assistant superintendent of construction on the project. The assignee of the contractor proceed against Stokes in 1907, suing for $90,000. But Stokes would defend himself, explaining that Duboy was in an insane asylum in Paris, and it was his belief that he was insane when, in 1903, he signed the final certificate on the plans, and should not have been making commitments in Stokes's name concerning the hotel.

In what might be the earliest harbinger of the current developments in urban farming, Stokes established a small farm on the roof of the hotel, where he kept farm animals next to his personal apartment. There was a cattle elevator, which enabled dairy cows to be stabled on the roof.

Stokes had a Utopian vision for the Ansonia—that it could be self-sufficient, or at least contribute to its own support—which led to perhaps the strangest New York apartment amenity ever. "The farm on the roof," Weddie Stokes wrote years later, "included about 500 chickens, many ducks, about six goats and a small bear." Every day, a bellhop delivered free fresh eggs to all the tenants, and any surplus was sold cheaply to the public in the basement arcade. Not much about this feature charmed the city fathers, however, and in 1907, the Department of Health shut down the farm in the sky.

The Ansonia was a residential hotel. The residents lived in "luxurious" apartments with multiple bedrooms, parlors, libraries, and formal dining rooms that were often round or oval. Apartments featured views north and south along Broadway, high ceilings, "elegant" moldings, and bay windows. There were three thousand rooms. Arrangements could be made to rent a suite varying in size from a room and a bath to thirty rooms. Some of these suites were rented for $14,000 a year, the equivalent of more than $400,000 in 2018. The smaller units, with one bedroom, parlor, and bath, lacked kitchens. There was a central kitchen and serving kitchens on every floor, so that the residents could enjoy the services of professional chefs while dining in their own apartments. Besides the usual array of tearooms, restaurants, and a grand ballroom, the Ansonia had Turkish baths and a lobby fountain with live seals.

Erected between 1899 and 1904, it was the largest residential hotel of its day and the first air-conditioned hotel in New York. The building has an eighteen-story steel-frame structure. The exterior is decorated in the Beaux-Art style with a Parisian style mansard roof. The Ansonia features round corner-towers or turrets and an open stairwell that sweeps up to a domed skylight. 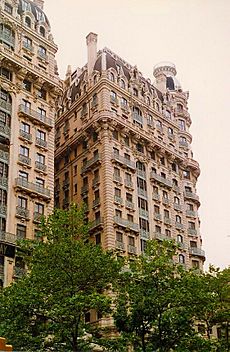 The building's copper cornices were removed during World War II and melted down for the war effort.

By the mid-twentieth-century, the grand apartments had mostly been divided into studios and one-bedroom units, almost all of which retained their original architectural detail. After a short debate in the 1960s, a proposal to demolish the building was fought off by its many musical and artistic residents.

In 1980, the building was inducted to the National Register of Historic Places.

The Ansonia is home to part of the New York campus of the American Musical and Dramatic Academy.

Children living in the Ansonia are eligible to attend schools run by the New York City Department of Education. The building is zoned to P.S. 87, the William Sherman School, but it is unzoned for middle school. Residents of the Ansonia may contact Region 10 to determine the middle-school assignments.

All content from Kiddle encyclopedia articles (including the article images and facts) can be freely used under Attribution-ShareAlike license, unless stated otherwise. Cite this article:
The Ansonia Facts for Kids. Kiddle Encyclopedia.