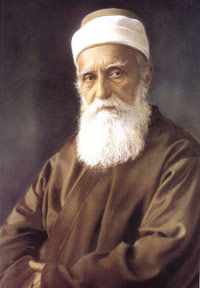 `Abdu'l-Bahá spent most of his adult life in prison or under arrest, because of his father's new religion. Bahá'u'lláh called him the "Expounder" of his word, meaning that only `Abdu'l-Bahá had the right to say what Bahá'u'lláh's writings mean. This was to prevent different people from splitting the religion up because they thought Bahá'u'lláh meant different things, the way many other religions have split up.

All content from Kiddle encyclopedia articles (including the article images and facts) can be freely used under Attribution-ShareAlike license, unless stated otherwise. Cite this article:
`Abdu'l-Bahá Facts for Kids. Kiddle Encyclopedia.