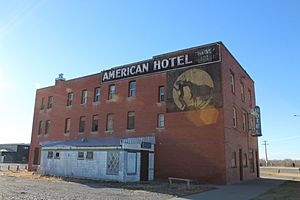 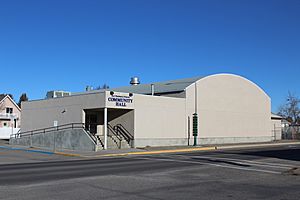 Fort Macleod, originally named Macleod to distinguish it from the North-West Mounted Police barracks (Fort Macleod, built 1874) it had grown around, is a town in the southwest of the province of Alberta, Canada. The fort was named in honour of the then Commissioner of the North-West Mounted Police, Colonel James Macleod. Founded as the Municipality of the Town of Macleod in 1892, the name was officially changed to the already commonly used Fort Macleod in 1952.

The fort was built as a 70 by 70 meters square (233 by 233 ft) on October 18, 1874. The east side held the men's quarters and the west side held those of the Mounties. Buildings such as hospitals, stores, and guardrooms were in the south end. Stables and the blacksmith's shop were in the north end.

Once agricultural settlement and the railway came to the region, Macleod boomed. The town became a CPR divisional point and frontier wood construction began to be replaced by brick and sandstone. In 1906 a fire devastated the downtown and destroyed most of the wooden buildings. From 1906 to 1912 Macleod had its greatest period of building, as more new brick and stone building replaced the destroyed wooden ones. Then in 1912 the CPR moved the divisional point and 200 jobs to Lethbridge, devastating the local economy. Fort Macleod ceased to grow, and in 1924 was forced to declare bankruptcy. Until the 1970s, the town's economy stagnated and the buildings from the turn-of-the-century remained untouched.

In 1978 Alberta Culture started to inventory the downtown buildings, and in 1982 the downtown became Alberta's first "Provincial Historic Area". As well, Heritage Canada started a Main Street Restoration Project in 1982, aiming to preserve the sandstone and brick buildings, some dating back to 1878.

The town is located in the Municipal District of Willow Creek No. 26, at the intersection of Highway 2 and Highway 3, on the Oldman River. It lies west of the larger community of Lethbridge, near the reserves of the Peigan and Kainai First Nations. It is also located close to the Waterton Lakes National Park.

The town is located 8 kilometres (5.0 mi) north of the McBride Lake Wind Farm, one of the largest wind farms in Alberta. The wind farm has a capacity of 75 megawatts of electricity.

The community enjoys frequent breaks from cold spells in winter when the Chinook wind blows down-slope from the Rocky Mountains. A Chinook on 27 February 1992 caused the temperature to rise to 26.5 °C (80 °F).

Ang Lee's Academy Award-winning movie Brokeback Mountain was filmed in part in Fort Macleod. The laundry apartment is located at 2422 Third Avenue, where a sign is posted marking the "passionate reunion" of Jack and Ennis. Passchendaele was also filmed in Fort Macleod's historic downtown, which acted as a stand-in for Calgary circa 1915. Scenes involving the dust storm and Matthew McConaughey's character were also filmed in Fort Macleod in Christopher Nolan's 2014 film Interstellar, where the giant dust clouds were created on location using large fans to blow cellulose-based synthetic dust through the air.

The town is home to the Fort Macleod Mustangs, Senior AA men's hockey team of the Ranchland Hockey League.

All content from Kiddle encyclopedia articles (including the article images and facts) can be freely used under Attribution-ShareAlike license, unless stated otherwise. Cite this article:
Fort Macleod Facts for Kids. Kiddle Encyclopedia.