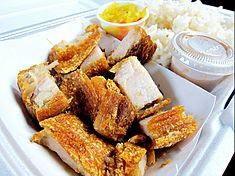 Lechón ( from leche "milk" + -ón) is a pork dish in several regions of the world, most specifically in Spain and former Spanish colonial possessions throughout the world. Lechón is a Spanish word referring to a roasted baby pig (piglet) which was still fed by suckling its mother's milk (a suckling pig). Lechón is a popular food in Spain, the Philippines, Cuba, Puerto Rico, the Dominican Republic, and other Spanish-speaking nations in Latin America. The dish features a whole roasted suckling pig cooked over charcoal. It has been described as a national dish of Cuba, Puerto Rico, and Spain.

Additionally, it is popular in the Philippines and other Austronesian regions, whose pig-roasting traditions have native pre-colonial origins. Although it acquired the Spanish name as a general term for "roasted pig", in these regions it more often refers to adult roasted pigs, not lechones (milk suckling pigs). It is also sometimes considered as one of the unofficial national dishes of the Philippines, with Cebu being asserted by American chef Anthony Bourdain as having the best pigs.

In most regions of the Philippines, lechón (spelled lechon without diacritic but also litson or lichon) is traditionally prepared throughout the year for special occasions, festivals, and the holidays. Although it acquired the Spanish name, Philippine lechon has pre-Hispanic origins as pigs are one of the native domesticated animals of all Austronesian cultures and were carried throughout the Austronesian Expansion all the way to Polynesia.

The native name of lechón is "inihaw [na baboy]" in Tagalog, a general term meaning "charcoal-roasted/barbecued [pig]". Native names were also preserved in other regions until recently, like in Cebu where it was previously more commonly known as inasal until Tagalog influence changed it to lechon in the 2000s. As the usage of the Spanish loanword evolved over the years in the languages of the Philippines, "lechon" has come to refer to roasted pig in general (including suckling pigs). Roasted suckling pigs are now referred to in the Philippines as "lechon de leche" (which in Spanish would be a linguistic redundancy, though corresponding to the term cochinillo in Spain).

Visayan lechon is prepared stuffed with herbs which usually include scallions, bay leaves, black peppercorn, garlic, salt, and distinctively tanglad (lemongrass) and/or leaves from native Citrus trees or tamarind trees, among other spices. A variant among Hiligaynon people also stuffs the pig with the sour fruits of batuan or binukaw (Garcinia binucao). It is usually cooked over charcoal made from coconut husks. Since it is already flavored with spices, it is served with minimal dipping sauces, like salt and vinegar or silimansi (soy sauce, calamansi, and labuyo chili).

Luzon lechon on the other hand, is typically not stuffed with herbs. When it is, it is usually just salt and pepper. Instead, the distinctiveness of Manila lechon comes from the liver-based sauce, known as the "lechon sauce". Lechon sauce is made from vinegar, brown sugar, salt, pepper, mashed liver (or liver spread), breadcrumbs, garlic and onion. Manila lechon is also typically cooked over woodfire.

Most lechon can either be cooked based on the two main versions, or mix techniques from both. Both variants also rub salt or spices unto the skin to make it crispier, as well as continually baste the lechon as it cooks. Sometimes carbonated drinks may also be used. They are cooked on a bamboo spit over charcoal for a few hours with constant (traditionally manual) turning. The pig is roasted on all sides for several hours until done. The process of cooking and basting usually results in making the pork skin crisp and is a distinctive feature of the dish.

Leftover parts from the lechon, such as the head and feet, are usually cooked into another popular dish, lechon paksiw. Like lechon itself, lechon paksiw also differs based on whether it is prepared Luzon-style or Visayas-style, with the former using liver sauce as an essential ingredient, while the latter does not. In some cases, these parts or stale lechon can be repurposed into another dish, such as Sisig.

The dish has been described as a national dish of Puerto Rico. The name of the dish in Puerto Rico is lechón asado. It is a traditional dish served at festivals and holidays.

It is similar in style to many preparations made in other South American countries, consisting of a roasted pig stuffed with yellow peas, green onion, yellow rice and spices, cooked in an outdoor brick oven for several hours.

It is mostly traditional to the Tolima Department in central Colombia and is usually accompanied by arepas, a corn-based bread.

All content from Kiddle encyclopedia articles (including the article images and facts) can be freely used under Attribution-ShareAlike license, unless stated otherwise. Cite this article:
Lechon Facts for Kids. Kiddle Encyclopedia.