The Visayas or Visayan Islands (Cebuano and Wáray-Wáray: Kabisay-an, Tagalog: Kabisayaan, Spanich: Bisayas), is one of the three principal geographical divisions of the Philippines; the other two divisions are Mindanao, to the south, and Luzon, to the north.

People living in this islands are called Visayans.

The Visayas consists of several islands in central Philippines around the Visayan Sea, with the Philippine Sea to the east and the Sulu Sea to the west.

The main islands (and area) are: 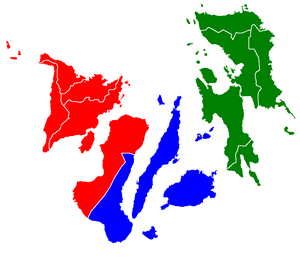 Administratively, the Visayas is divided into 3 regions: Western Visayas, Central Visayas and Eastern Visayas. Each region is headed by a Regional Director.

The Visayas is composed of 16 provinces, each headed by a governor.

Western Visayas consists of the islands of Panay and the western half of Negros; it has a population, in 2010, of 7,102,438. The regional center is Iloilo City. Its provinces are:

Central Visayas includes the islands of Cebu and Bohol and the eastern half of Negros; it has a population, in 2010, of 6,800,180. The regional center is Cebu City. Its provinces are:

Eastern Visayas consists of the islands of Leyte and Samar; it has a population, in 2010, of 4,101,322. The regional center is Tacloban. Its provinces are:

All content from Kiddle encyclopedia articles (including the article images and facts) can be freely used under Attribution-ShareAlike license, unless stated otherwise. Cite this article:
Visayas Facts for Kids. Kiddle Encyclopedia.