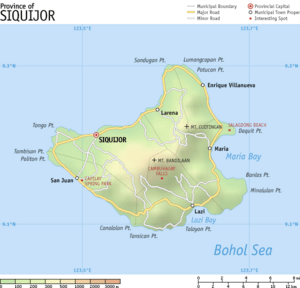 A map of Siquijor

The provincial flag of Siquijor 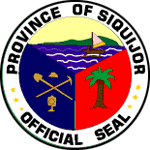 The provincial seal of Siquijor

Siquijor is an island province of the Philippines. It is located in the Visayas region. To the west of Siquijor is Negros Oriental, to the east is Bohol, to the north is Cebu, and to the south is Mindanao. The population of Siquijor is about 90,000. It has six municipalities: Larena, Enrique Villanueva, Maria, Lazi, San Juan, and the capital also named Siquijor.

Siquijor is one of the smallest island provinces in the Philippines, in terms of both land area and population. Sights to see in Siquijor include an old tree, a few waterfalls, butterfly gardens, old churches, and many beaches. Siquijor is also home to one of the oldest existing convents in Asia.

All content from Kiddle encyclopedia articles (including the article images and facts) can be freely used under Attribution-ShareAlike license, unless stated otherwise. Cite this article:
Siquijor Facts for Kids. Kiddle Encyclopedia.