Central Visayas, designated as Region VII, is a region of the Philippines in the central part of the Visayas island group. It consists of four provinces–Bohol, Cebu, Negros Oriental, and Siquijor– and the highly urbanized cities of Cebu City, Lapu-Lapu City, and Mandaue. The region is dominated by the native speakers of Cebuano. Cebu City is its regional center.

The Central Visayas region is composed of 4 provinces and 3 independent cities:

Although Cebu City, Mandaue, and Lapu-Lapu City are often grouped under the province of Cebu for statistical purposes by the National Statistics Office, as highly urbanized cities they are administratively independent from the province.

Surrounded by Region VIII (Eastern Visayas), Central Visayas does not get many typhoons. Region VII has a weather of cloudy skies with scattered rains. Central Visayas has 80-90% humidity. The dry season is from April-May wet during the rest of the year.

Cebuano is the dominant language of the region. In Bohol, Cebuano is referred to as Boholano. In the Camotes Islands, which is part of Cebu, Cebuano language is spoken in the towns of Tudela, Pilar and San Francisco. Except the town of Poro, in which, Porohanon is spoken (a variation or mixture of Cebuano, Hiligaynon (Ilonggo) and Masbateño language). 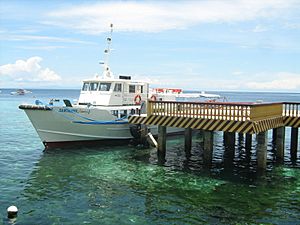 Fastcraft terminal for ferrying passengers from Cebu to Negros.

The Port of Cebu is the region's main gateway. There are also ports in Dumaguete City in Negros Oriental, Tagbilaran in Bohol and Larena in Siquijor. Inter-island shipping is served by numerous shipping lines, two of them fastcraft companies which serve all the provinces in the region. 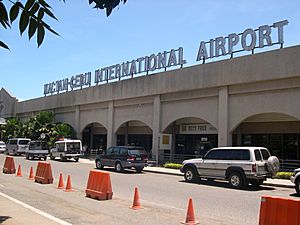 All content from Kiddle encyclopedia articles (including the article images and facts) can be freely used under Attribution-ShareAlike license, unless stated otherwise. Cite this article:
Central Visayas Facts for Kids. Kiddle Encyclopedia.