Tagbilaran is the capital and main city of the Bohol province, in the Bohol island, Philippines. Because of the Tagbilaran Airport, the city is an important way for tourists to start trips through the rest of the island and neigboring islands.

The inhabitants of this city are known as tagbilaranons. 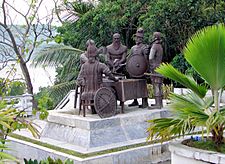 In 1565, a Spanish explorer named Miguel López de Legazpi came to Bohol looking for spices and gold. He made a peace pact with Datu Sikatuna in a place called Bool, now a district of Tagbilaran. This pact was signed with a blood pact between the two men.

On 9 February 1742, the Governor of the Visayas Francisco Antonio Calderon de la Barca separated Tagbilaran from Baclayon and made it a town with the name of San Jose de Tagbilaran and dedicated to St. Joseph the Worker. Since then, it was part of the province of Bohol and became officially a component city (a city that is part of a province) on 1 July 1966 by the Republic Act No. 4660. 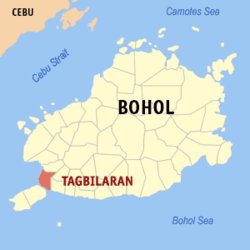 Map of Bohol showing the location of Tagbilaran

Tagbilaran is in the southwestern part of the island of Bohol, in front of the smaller island of Panglao; between the two islands is the Tagbilaran Strait.

Tagbilaran borders with the municipalities of Cortes (north), Corella (northeast) and Baclayon (east). To the south is the Tagbilaran Strait and the Panglao island, and to the west is the Maribojoc Bay (part of the Cebu Strait).

Tagbilaran has, like the rest of the Philippines, a tropical climate. The average temperature is high and the humidity is also high. The dry and the wet seasons are very similar.

The city of Tagbilaran is divided into 15 barangays (like neighbourhoods).

All content from Kiddle encyclopedia articles (including the article images and facts) can be freely used under Attribution-ShareAlike license, unless stated otherwise. Cite this article:
Tagbilaran Facts for Kids. Kiddle Encyclopedia.