Buckinghamshire was born at Hampden House, the son of George Hobart, 3rd Earl of Buckinghamshire and Albinia, daughter of Lord Vere Bertie, younger son of Robert Bertie, 1st Duke of Ancaster and Kesteven. He was educated at Westminster School, London and later served in the American Revolutionary War. He acted as aide-de-camp to successive lord lieutenants of Ireland from 1784 onwards.

Buckinghamshire was a Member of Parliament (MP) in the Irish House of Commons for Portarlington from 1784 to 1790 and thereafter for Armagh Borough from 1790 to 1797. He sat also in the British House of Commons for the rotten borough of Bramber in 1788, a seat he held until 1790, and then for Lincoln from 1790 to 1796. In 1793 he was invested a member of the Privy Council, and appointed Governor of Madras. In 1798 he was recalled to England by the President of the Board of Control responsible for Indian affairs, Henry Dundas and summoned to the House of Lords through a writ of acceleration in his father’s junior title of Baron Hobart. He later served as Secretary of State for War and the Colonies from 1801 to 1804 when it was said he had "a better grasp of the local or colonial conditions, and a more active spirit than did some of his successors." He was Chancellor of the Duchy of Lancaster in 1805 and again in 1812, Postmaster General from 1806 to 1807 and President of the Board of Control from 1812 to 1816. Hobart, the capital of Tasmania, is named after Lord Buckinghamshire. 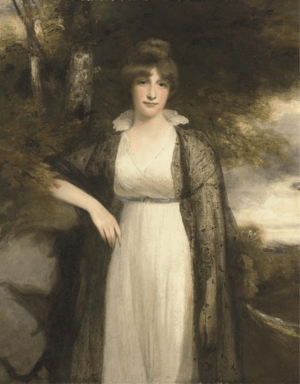 Lord Buckinghamshire married firstly Margaretta, daughter of Edmund Bourke, in 1792. They had one son (who died in infancy) and a daughter, Lady Sarah, who married Prime Minister Lord Goderich and was the mother of George Robinson, 1st Marquess of Ripon. After Margaretta's death in 1796 he married secondly the Hon. Eleanor Agnes, daughter of William Eden, 1st Baron Auckland, in 1799. There were no children from this marriage. Lord Buckinghamshire died in February 1816 at the age of 55, after a fall from his horse. He was succeeded in the earldom by his nephew, George. Lady Buckinghamshire died in October 1851, aged 74.

All content from Kiddle encyclopedia articles (including the article images and facts) can be freely used under Attribution-ShareAlike license, unless stated otherwise. Cite this article:
Robert Hobart, 4th Earl of Buckinghamshire Facts for Kids. Kiddle Encyclopedia.