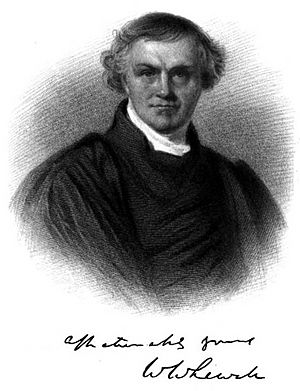 William Whewell (24 May 1794 – 6 March 1866) was an English polymath, Anglican priest, philosopher, theologian, and historian of science. He influenced the great scientists of his day: John Herschel, Charles Darwin, Charles Lyell and Michael Faraday. He invented many terms we use today, such as scientist (in 1837).

The son of a carpenter, Whewell rose to the top. For 28 years he was a Professor, and for 25 years he was Master of Trinity College, Cambridge. He was one of the founding members and a president of the British Association for the Advancement of Science, a Fellow of the Royal Society, and President of the Geological Society. It was the Prime Minister himself, Robert Peel, who recommended his appointment as Master of Trinity.

Whewell had wide interests. He researched ocean tides (for which he won the Royal Medal). He published work in mechanics, physics, geology, astronomy, and economics. He composed poetry, wrote books, translated the works of Goethe, and wrote sermons and theological tracts.

It can be said that Whewell was the first, or one of the first, to put together a philosophy of science. His only rival in this respect was John Herschel, whose A preliminary discourse on the study of natural philosophy covered some of the same ground.

Whewell's five volumes of the History and Philosophy of the Inductive Sciences are his major work. Science was then still a novel activity. The scientists themselves held differing views as to how best to go about their work. Whewell provided a theoretical framework, and the framework provoked a great deal of debate. There was also a long-running discussion with John Stuart Mill about social and economic philosophy.

All content from Kiddle encyclopedia articles (including the article images and facts) can be freely used under Attribution-ShareAlike license, unless stated otherwise. Cite this article:
William Whewell Facts for Kids. Kiddle Encyclopedia.