Subrahmanyan Chandrasekhar (19 October 1910 – 21 August 1995) is an Indian Physicist. He received the 1983 Nobel Prize in Physics "for his theoretical studies of the physical processes of importance to the structure and evolution of the stars".

He was born in Lahore, British India (now Pakistan). He died in Chicago. 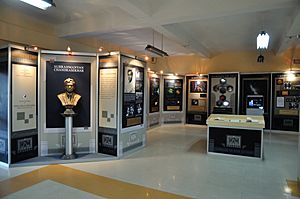 An exhibition on life and works of Subrahmanyan Chandrasekhar was held at Science City, Kolkata, on January, 2011.

All content from Kiddle encyclopedia articles (including the article images and facts) can be freely used under Attribution-ShareAlike license, unless stated otherwise. Cite this article:
Subrahmanyan Chandrasekhar Facts for Kids. Kiddle Encyclopedia.