Herstmonceux ( HURSS-mən-ZOO --SOO; howss-MOWN-seez) is a village and civil parish in the Wealden District of East Sussex, England, which includes Herstmonceux Castle.

The Herstmonceux Medieval Festival is held annually in August.

The name ’’Herstmonceux’’ comes from Anglo-Saxon hyrst, "wooded hill", plus the name of the Monceux family who were lords of the manor here in the 12th century.

The village (previously called Gardner Street) is part of the larger Herstmonceux civil parish, which includes Cowbeech and the hamlets of Foul Mile, Trolliloes, Cowbeech Hill, Stunts Green, Ginger's Green, Flowers Green and part of Windmill Hill. Cowbeech village is located to the north-west of the parish. 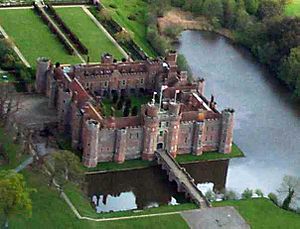 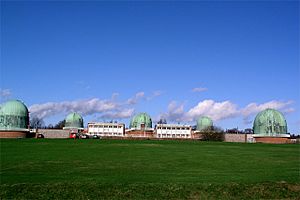 Herstmonceux Castle (some 2 miles (3.2 km) south-east of the village) is a former site of the Royal Greenwich Observatory. It is now home to the Bader International Study Centre of Queen's University, Kingston, Canada, and the area therefore enjoys an influx of Canadian and other international students each school year. The castle grounds are also home to the Observatory Science Centre, which is operated by Science Projects Limited, and the Herstmonceux Mediaeval Festival. Buckwell Place was the seat of the Hare family.

There are two Sites of Special Scientific Interest within the Parish. Herstmonceux Park is of importance because of its wetland habitat and fen vegetation. It is the only known location of Milk Parsley (Peucedanum palustre) in the south-east. The second site, Pevensey Levels, lies partially in the parish. The site is of biological interest consisting of low-lying grazing meadows, hosting a wide variety of wetland flora and fauna.

Main page: List of current places of worship in Wealden

All Saints (Church of England) parish church, with its 12th century west tower and 13th/14th century nave, overlooks the Castle. Herstmonceux Congregational Church, located just outside the village on the way to the castle, was erected in 1811 and is now a listed building.

The Herstmonceux Medieval Festival is held annually in August.

The village is twinned with Varengeville-sur-Mer, in Normandy, France.

All content from Kiddle encyclopedia articles (including the article images and facts) can be freely used under Attribution-ShareAlike license, unless stated otherwise. Cite this article:
Herstmonceux Facts for Kids. Kiddle Encyclopedia.