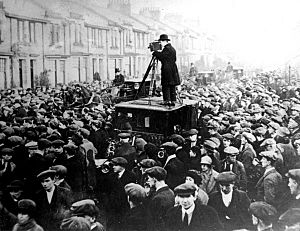 Pollokshaws is an area on the southside of the city of Glasgow, Scotland. The housing stock mostly consists of some sandstone tenement housing and modern brick tenement-style buildings. According to the 2001 Census Pollokshaws has a population of 4,295.

Eight tower blocks formerly stood in an area known as the Shawbridge Corridor. The final block was demolished in March 2016.

Its residents are a mixture of working class and middle class social groups, and the area also has a large South Asian community.

Pollokshaws was originally a village predominantly dedicated to weaving in the 17th century. A group of Flemish weavers were brought to the area in the 19th century by the landowners, the Maxwells of Pollok on account of their exceptional weaving skills.

Pollokshaws was a burgh of Renfrewshire until 1912 when it was annexed to the City of Glasgow. An industrial area, this changed in 1957 when it was proposed as the second Comprehensive Development Area in Glasgow (the first was Hutchesontown). The area was demolished and started anew. A large number of tower blocks were built in the 1960s, and later demolished between 2008 and 2016 in the Shawbridge Corridor regeneration. The areas where these blocks were will have a mix of social and private housing.

The blowdowns of the first two towers in July 2008 was filmed in detail by an American company and can be seen as part of the documentary series "The Detonators".

All content from Kiddle encyclopedia articles (including the article images and facts) can be freely used under Attribution-ShareAlike license, unless stated otherwise. Cite this article:
Pollokshaws Facts for Kids. Kiddle Encyclopedia.