Avebury is a village and civil parish in Wiltshire, England. The village is about 5.5 miles (9 km) west of Marlborough and 8 miles (13 km) northeast of Devizes. Much of the village is encircled by the prehistoric monument complex also known as Avebury. The parish also includes the small villages of Avebury Trusloe and Beckhampton, and the hamlet of West Kennett.

The Avebury monument is vast, and consists of several smaller sites of varying dates. The earliest of these, the earthworks, dates to between 3400 and 2625 BC. Later additions include a henge and several stone circles. Starting in around the 14th century, locals began dismantling the stone circles for one reason or another: to clear land, to provide material for other building projects, or simply to efface a pagan monument. In 1648 John Aubrey visited the site and found most of the stones still standing or lying nearby:

These Downes looke as if they were Sown with great Stones, very thicke; and in a dusky evening they looke like a flock of Sheep: from whence it takes its name. One might fancy it to have been the Scene where the Giants fought with stones against the Gods... I was wonderfully surprised at the sight of those vast stones, of which I had never heard before; as also at the mighty Banke and Graffe [ditch] about it. I observed in the Inclosures some segments of rude circles, made with these stones, whence I concluded, they had been in old time complete.

In the 18th century, William Stukeley visited the site and chronicled the further damage that had been done. In 1872, the banker and Liberal MP, Sir John Lubbock, bought part of the village and protected the monuments. He later promoted the Ancient Monuments Protection Act 1882 to ensure the British government protected ancient monuments.

In the 1930s, the archeologist Alexander Keiller re-erected many of the fallen stones, partially restoring the circle to its original condition. In 1943 the government took possession of the monument and the village; they are currently administered by the National Trust. In 1986 UNESCO added Avebury, along with Stonehenge, Silbury Hill, and associated local sites, to its World Heritage List.

Besides the Avebury Stone Circle itself, there are numerous other prehistoric sites nearby, including West Kennet Long Barrow and the West Kennet Avenue, both of which are near to the included settlement of West Kennett. The name of the settlement is always spelt with two 't's whilst the archaeological sites are generally spelt with one. 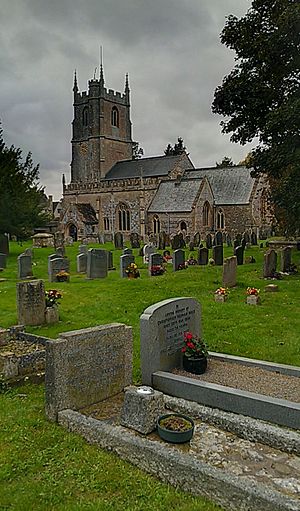 Pevsner describes the Church of England parish church as "archaeologically uncommonly interesting". It has an 11th-century Saxon nave in which two original Saxon windows survive. In the 13th century the church's dedication was recorded as All Saints but it now bears a dedication to Saint James. The church is Grade I listed.

A nonconformist chapel was built inside the stone circle circa 1670, then extended in the 18th century and again in 1830. In the 20th century the congregation joined the United Reformed Church and in 1977 the building was designated as Grade II listed. In 2015 there was no regular worship and the future of the building was under consideration.

Avebury Manor and Garden is a National Trust property located in the village, consisting of the manor house and its garden.

The house was built in about 1557 on the site of a Benedictine alien priory. The priory had been founded in 1114 as a cell of the monastery of Saint Georges de Boscherville near Rouen in Normandy. During the Hundred Years' War against France, Henry V had all alien priories dissolved. Avebury priory was dissolved in 1411 and its property granted to Fotheringhay College. The college then held the manor of Avebury until the Dissolution of the Monasteries in the 16th century.

Avebury is a civil parish with an elected parish council. It is in the area of Wiltshire Council unitary authority, which is responsible for all significant local government functions.

The village pub, The Red Lion, a Grade II listed farmhouse from the late 16th century, claims to be the only pub in the world to be enclosed by a stone circle. It was built around the 86-foot deep village well which has been covered over with glass and now features as a dining table. An inscription around the well claims that at least one villager died after falling down it.

The village has no school, following closure of the primary school in 2007. This school, on the High Street opposite the church, began as a National School in 1844, then was rebuilt in 1849 and enlarged in 1873. In 1970 a new school was built behind the original and the old building became a social club for the community.

The stone circle has been used several times as a filming location. It was used in the short film Lucifer Rising (1972), and for the 1998 film Still Crazy.

Avebury was also the setting for the 1977 cult HTV West series Children of the Stones that depicts Avebury (renamed "Millbury") as a town controlled by the stones.

Also in 1977, it was the location for the BBC's A Ghost Story for Christmas episode "Stigma".

In 2002, the stones and the Red Lion were the subject of an episode of Most Haunted, first shown on Living TV.

Avebury, in particular, The Cove, is the setting for some of the action in and is referred to throughout Elly Griffiths' novel, The Stone Circle (Ruth Galloway, No.11) (2019).

All content from Kiddle encyclopedia articles (including the article images and facts) can be freely used under Attribution-ShareAlike license, unless stated otherwise. Cite this article:
Avebury (village) Facts for Kids. Kiddle Encyclopedia.