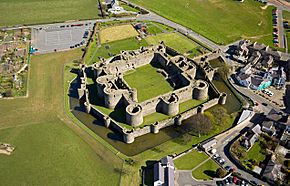 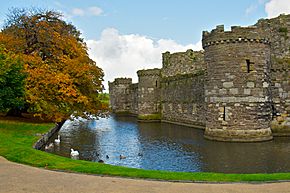 Beaumaris Castle (French: beau marais, Literal translation: beautiful marsh) was a castle built in Beaumaris, Anglesey, Wales by King Edward I of England. King Edward built the castle to help him take over North Wales. It was one of several castles built along the North Wales coast.

The castle was started in 1295 and work stopped in 1330. The castle was left unfinished. Small amounts of money were spent in the 1330s and 1400s to maintain (keep up) the castle. However, these payments were stopped. By 1609, the castle was a ruin. In 1642, money was spent on repairs. No more work was done and it became a ruin again. In 1925, Richard Williams-Bulkeley placed Beaumaris Castle in state care. Since then, it has been fixed and maintained. In 1986, the castle was placed on the World Heritage List. Today, Beaumaris is cared for by Cadw. It is open to visitors.

All content from Kiddle encyclopedia articles (including the article images and facts) can be freely used under Attribution-ShareAlike license, unless stated otherwise. Cite this article:
Beaumaris Castle Facts for Kids. Kiddle Encyclopedia.