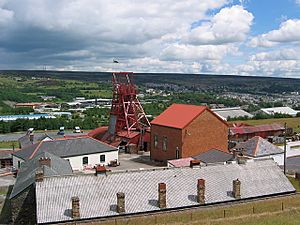 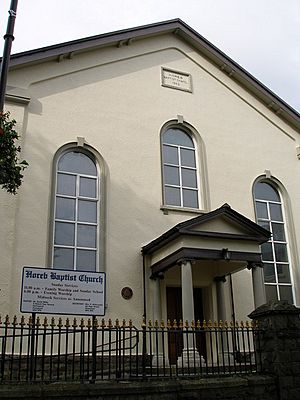 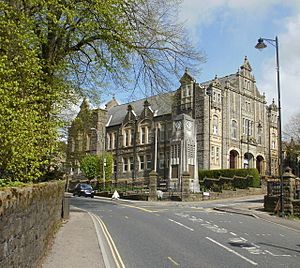 Blaenavon (Welsh: Blaenafon) is a town in southeastern Wales. It is on the south of Afon Lwyd and north of Pontypool. Parts of the town and surrounding country form the Blaenavon Industrial Landscape became part of the World Heritage Site by UNESCO in 2000. There are about 6,057 people living there.

Blaenavon literally means "front of the river" or loosely translated as "river's source" in the Welsh language.

Blaenavon is a community represented by Blaenavon Town Council, and electoral ward of Torfaen County Borough Council. Blaenavon is often

twinned with Coutras in France.

The town is near the source of the Afon Lwyd river. It is in the north of Cwmbran.

Parts of the town and surrounding country form the Blaenavon Industrial Landscape were recognised as a World Heritage Site by UNESCO in 2000. Some of the attractions in the town include:

After Samuel Hopkins death in 1815, his sister Sarah Hopkins of Rugeley, erected Blaenavon Endowed School in his memory.

St Peter's Church was constructed in 1804. It was gifted to the parish by Thomas Hill and Samuel Hopkins.

Some of the most notable people from Blaenavon are:

All content from Kiddle encyclopedia articles (including the article images and facts) can be freely used under Attribution-ShareAlike license, unless stated otherwise. Cite this article:
Blaenavon Facts for Kids. Kiddle Encyclopedia.