Blaenavon Ironworks is a former industrial site which is now a museum in Blaenavon, Wales. The ironworks was of crucial importance in the development of the ability to use cheap, low quality, high sulphur iron ores worldwide. It was the site of the experiments by Sidney Gilchrist Thomas and his cousin Percy Gilchrist that led to "the basic steel process" or "Gilchrist-Thomas process".

The ironworks is on the outskirts of Blaenavon, in the borough of Torfaen, within the Blaenavon Industrial Landscape, a World Heritage Site. The site is under the care of Cadw, the Welsh Government's historic environment service.

History of the works 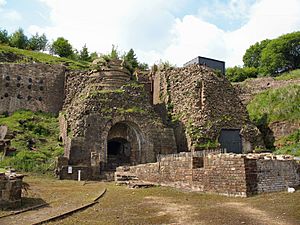 Two of the furnaces 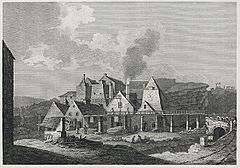 The land on which the ironworks sits was at one time the property of Lord Abergavenny and was leased in 1787 by three Midlands businessmen, Thomas Hill, his brother-in-law Thomas Hopkins and Benjamin Pratt. Work constructing the ironworks began immediately and included several "luxury" cottages. Blaenavon Ironworks was the first to be designed as a multi-furnace site from the outset, with three furnaces, calcining kilns, cottages, and a company shop.

Archdeacon Coxe visited Blaenavon during 1798–99 and enthusiastically described the small town as an opulent and increasing establishment, which was ...surrounded with heaps of ore, coal and limestone... The reason for the growth of Blaenavon from a rural to an industrial community lay in the rich mineral deposits found in the surrounding area, which outcropped at the surface making extraction a relatively cheap process. The ironworks demanded a skilled and permanent labour force, which the Eastern Valley of Monmouthshire lacked. Previous iron works at nearby Pontypool, for instance, had relied on charcoal and water.

The nature of the work introduced to Blaenavon was different. The changes involved the coal-using technology and the application of steam power, not used until that time in the Eastern Valley. Skilled workers came mainly from West Wales, Staffordshire, Gloucestershire, Herefordshire, Somerset and Ireland. Unskilled men, often with families, came for the promise of work. The population of the district expanded from a little over 1,000 in 1800 to 5115 in 1840, with 61% speaking Welsh and the remainder English.

By 1800 Blaenavon Ironworks contributed greatly to South Wales becoming the foremost iron-producing region in the world. Production at Blaenavon was second only to Cyfarthfa Ironworks in Merthyr Tydfil, the largest iron producer in Wales. Two new furnaces were added over the next decade and in 1804 a forge was constructed in nearby Cwmavon. By 1833 the company owned 430 houses and employed 1000 workers but suffered a periodic boom-and-bust economy that accompanied iron-making with wage cuts, strikes, and the emergence of "Scotch Cattle". 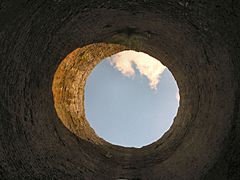 In 1836, the works was bought by the Blaenavon Iron and Coal Company, financed by Londoner Robert Kennard, later an MP. Led by new managing director James Ashwell, a huge investment was made in the ironworks, including the construction of the impressive balance tower which utilised a water displacement lift to carry pig iron from the base of the site to the Brecknock and Abergavenny Canal system, which offered lower tolls to Newport than the Monmouthshire Canal. After this £138,000 investment the site showed little sign of profit and Ashwell was forced to resign in 1840. In the following years, iron rails produced at Blaenavon were exported all over the world, including India, Russia, and Brazil; but also in projects closer to home such as the construction of Crumlin Viaduct.

When Ashwell resigned, Mr. Scrivener became manager of the works and production picked up for a short while. In 1845 sales reached a peak of 35,549 tons out of which 20,732 tons were sold. This was a rise of 5,000 tons on sales for the previous year. However, fluidity was uncertain. By 1847 sales had declined to 18,981 tons. The works continued to suffer. A lower amount of pig iron was produced in 1849, partly due to the furnaces being out of action for three months. It was claimed, however, that this was the consequence of workmen refusing to submit to a reduction in wages, which the depressed state of the iron industry had rendered necessary.

The company was relaunched in 1870 as the Blaenavon Iron & Steel Company and was one of only six south Wales ironworks that successfully made the change to steel production. By 1878 the company employed 5,000 people but had greatly overreached itself financially and failed against tough competition. With financial ruin just around the corner, the company was given some respite thanks to the discoveries of Sidney Gilchrist Thomas and Percy Carlyle Gilchrist which enabled the use of the previously uneconomic phosphoric iron ore. Their experiments were carried out at Blaenavon between 1877 and 1878. This was short lived as it meant Germany and North America were now able to utilise their own phosphoric ores which accelerated the decline of Blaenavon Ironworks. 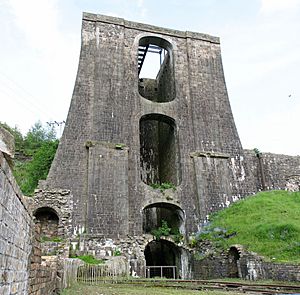 In 1880 the Blaenavon Company opened Big Pit and moved away from iron production. In 1904 the ironworks finally ceased production, restarting briefly in 1924 but was unsustainable. The forges at the site were still being used and helped with the production of steel shell during both world wars but was mostly used as a storage yard for the National Coal Board.

In 2000 Blaenavon was awarded World Heritage Site status for the industrial landscape including the ironworks and are now under the care of Cadw.

In 2001, the structure underwent a major restructuring. The 160-year old cast iron columns at the top of the tower were taken down and the iron frame was cast and painted in order to ensure that it stayed intact now that it was a World Heritage Site. 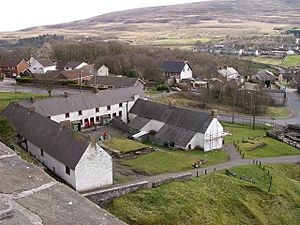 Stack Square is a small group of cottages in Blaenavon. It was featured in the BBC television series Coal House, which was a reality TV series shown on BBC One Wales in October 2007. In the series, three Welsh families are transported back to the south Wales coalfield conditions of the 1920s. For the show, the Stack Square cottages located at the ironworks were transformed into authentic looking 1927 coal mining family homes. In October 2008 the series was followed by Coal House at War where three new families were transported back to the Second World War era conditions of 1944. This time they were joined by evacuees and members of the Bevin Boys.

The miners' cottages in Stack Square have now been restored to their original design and form as part of the ironworks site and are open to the public at the ironworks. The cottages have been furnished to represent different life in different eras, from the 1870's to the 1970's.

All content from Kiddle encyclopedia articles (including the article images and facts) can be freely used under Attribution-ShareAlike license, unless stated otherwise. Cite this article:
Blaenavon Ironworks Facts for Kids. Kiddle Encyclopedia.