Founded in the twelfth century by Benedictine monks, so that local people who lived in the area around the Abbey could worship separately at their own simpler parish church, and historically part of the hundred of Ossulstone in the county of Middlesex, St Margaret's was rebuilt from 1486 to 1523. It became the parish church of the Palace of Westminster in 1614, when the Puritans of the seventeenth century, unhappy with the highly liturgical Abbey, chose to hold Parliamentary services in the more "suitable" St Margaret's: a practice that has continued since that time.

The Rector of St Margaret's is a canon of Westminster Abbey.

The north-west tower was rebuilt by John James from 1734 to 1738; at the same time, the whole structure was encased in Portland stone. Both the eastern and the western porch were added later by J. L. Pearson. The church's interior was greatly restored and altered to its current appearance by Sir George Gilbert Scott in 1877, although many of the Tudor features were retained.

Notable features include the east window of 1509 of Flemish stained glass, created to commemorate the betrothal of Catherine of Aragon to Henry VIII. Other windows commemorate William Caxton, Britain's first printer, who was buried at the church in 1491, Sir Walter Raleigh, executed in Old Palace Yard and then also buried in the church in 1618, the poet John Milton, a parishioner of the church, and Admiral Robert Blake. The collector Henry Constantine Jennings is also buried there.

Following the Restoration of the Monarchy, in 1661 the Parliamentarians who had been buried in Westminster Abbey (Admiral Robert Blake, Denis Bond, Nicholas Boscawen, Mary Bradshaw, Sir William Constable, Admiral Richard Deane, Isaac Dorislaus, Anne Fleetwood, Thomas Hesilrige, Humphrey Mackworth, Stephen Marshall, Thomas May, John Meldrum, Admiral Edward Popham, John Pym, Humphrey Salwey, William Strong, William Stroud and William Twiss) were disinterred from the Abbey and reburied in an unmarked pit in St Margaret's churchyard on the orders of King Charles II. A memorial to them can now be found set into the external wall to the left of the main west entrance. 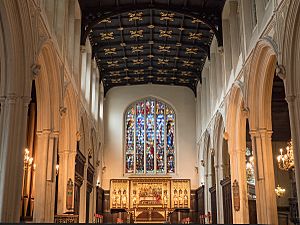 The church has been a common venue for society weddings which include:

Other weddings include that of extended members of the British Royal Family:

Others notable weddings include members of the Bright Young People.

The ensemble of St Margaret's, the Palace of Westminster and Westminster Abbey is a World Heritage Site. Members of Parliament and staff members of the House of Lords and House of Commons are permitted to marry in the church.

On Easter day in 1555 a former Benedictine monk, William Flower entered the church and attacked a priest who was administering the sacrament. Although he repented for the injury he caused the priest, Flower would not repent his motive which was based on a rejection of the doctrine of transubstantiation. He was thus sentenced for heresy and burned at the stake outside the church.

During the First World War, Edward Lyttelton, headmaster of Eton, gave a sermon in the church on the theme of "Loving your enemies", promoting the view that any post-war treaty with Germany should be a just one and not vindictive. He had to leave the church after the service by a back door, while a number of demonstrators sang "Rule Britannia" in protest at his attitude.

The treble choristers for St Margaret's are supplied by Westminster Under School. The church also hosted the first performance by the UK Parliament Choir under Simon Over in 2000.

An organ was installed in 1806 by John Avery. The current organ is largely built by J. W. Walker & Sons Ltd. A specification of the organ can be found on the National Pipe Organ Register.

From 1972 to 2010, the Rector was also the Chaplain to the Speaker of the House of Commons.

Organists who have played at St Margaret's include:

All content from Kiddle encyclopedia articles (including the article images and facts) can be freely used under Attribution-ShareAlike license, unless stated otherwise. Cite this article:
St Margaret's, Westminster Facts for Kids. Kiddle Encyclopedia.