The World Heritage Committee considered placing the site on the List of World Heritage in Danger in 2014. This proposal was rejected. Instead, they agreed on a follow-up "Reactive Monitoring Mission".

Devon made around 25-40% of the amount of tin that Cornwall did up to the mid-16th century. However, the total amount of tin made in both Cornwall and Devon at this time was relatively small. After the 1540s, Cornwall's production took off while Devon's production was only about between a ninth to a tenth of that of Cornwall.

From the mid-16th century onwards, the Devon Stannaries were giving very little in income to the King. They were sidelined after the Supremacy of Parliament Act 1512.

The landscapes of Cornwall and West Devon were reshaped during the 18th and 19th centuries by the mining of copper and tin. The underground mines, engine houses, foundries, new towns, smallholdings, ports, harbours, and other supporting industries together meant the region produced two-thirds of the world's supply of copper.

During the late 19th century, arsenic production came to the east of Cornwall and West Devon. As a result, the region supplied half the world’s demand. 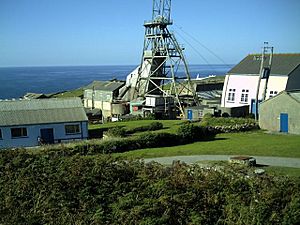 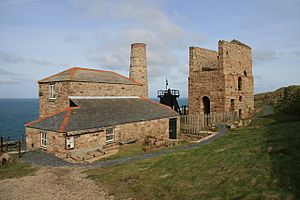 The World Heritage site consists of individual but topical linked areas around Cornwall and West Devon. The areas (with the area codes from the site nomination) are: 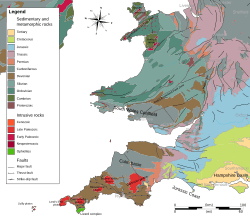 Geology of Wales and SW England

Devon and Cornwall rocks were once in the core of huge volcanic mountains. Those rocks usually contain more heavy metallic elements than usually found on the Earth's surface. A recent news item says a new mineral was found in Cornwall called Kernowite.

Rocks from ocean floor mid-ocean ridges (oceanic lithosphere) may come to the surface under orogeny as ophiolites. Wherever there is a large ground-down mountain chain there may be a source of heavy metals.

All content from Kiddle encyclopedia articles (including the article images and facts) can be freely used under Attribution-ShareAlike license, unless stated otherwise. Cite this article:
Cornwall and West Devon Mining Landscape Facts for Kids. Kiddle Encyclopedia.