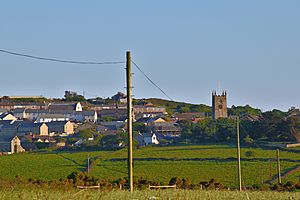 St Just (Cornish: Lan(n)ust), known as St Just in Penwith, is a town and civil parish in the Penwith district of Cornwall, England, United Kingdom. It lies along the B3306 road which connects St Ives to the A30 road. The parish encompasses the town of St Just and the nearby settlements of Trewellard, Pendeen and Kelynack: it is bounded by the parishes of Morvah to the north-east, Sancreed and Madron to the east, St Buryan and Sennen to the south and by the sea in the west. The parish consists of 7,622 acres (3,085 ha) of land, 12 acres (4.9 ha) of water and 117 acres (47.3 ha) of foreshore. The town of St Just is the most westerly town in mainland Britain and is situated approximately 8 miles (13 km) west of Penzance along the A3071. St Just parish, which includes Pendeen and the surrounding area, has a population of 4,637 (2011 census). An electoral ward of the same name also exists: the population of this ward at the same census was 4,812.

The identity of Saint Just is not known. Cornwall's long resistance to the edicts of Canterbury and Rome makes it most unlikely that the saint was Archbishop Justus of Canterbury, as some sources claim. In 1478 William of Worcester found that the church was believed to contain the bones of Justus of Trieste.

Among the prehistoric antiquities nearby is Ballowall Barrow, a chambered tomb. St Just is one of the most ancient mining districts in Cornwall, and remains of ancient pre-industrial and more modern mining activity have had a considerable impact on the nearby landscape. 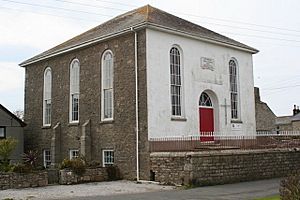 The parish church of St Just is a fine 15th-century building. In 1336 the church was rebuilt and dedicated by John Grandisson, Bishop of Exeter; however only the chancel of this church survives and the nave and aisles are 15th-century in date. There are two Methodist chapels.

St Just is the home of Cape Cornwall School which also serves Sennen, Sancreed, Pendeen, St Buryan and other places in the district.

There are seven Cornish crosses in the parish; there are two in the vicarage garden and one built into the church wall. Other crosses are at Leswidden, Nanquidno and Kenidjack (two).

The ancient settlement has a strong mining history and was during the 19th century one of the most important mining districts in Cornwall both for copper and for tin. Mines within the area included Boscaswell Downs, Balleswidden, Parknoweth, Boscean, Wheal Owles, Wheal Boys, Levant, Botallack and Geevor (which closed in 1990). Geevor mine is now a tourist attraction which allows visitors to explore Cornish Mining heritage. The boom in 19th-century mining saw a dramatic increase in the population of St Just, the 1861 census records the population figure as being 9,290, however like other areas in Cornwall the population declined with the collapse in the tin trade in the 19th century. The town also suffered from the decision of the Great Western Railway to abandon its plans to make St Just the terminus of the London mainline to Cornwall. It was announced in July 2006 that the St Just mining district and the rest of the historic mining areas of Cornwall had become the Cornwall and West Devon Mining Landscape World Heritage Site.

The nearby Cot Valley has a stream which runs to the sea. The area has been heavily mined, as was the area around St Just. The round boulders in the Cot Valley Cove here are of specific scientific interest. Also nearby is Cape Cornwall. 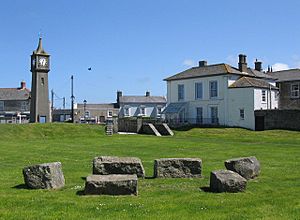 Plen an Gwarry, common green near the clock tower in the centre of St Just

St Just is home to the popular Lafrowda festival a seven-day community and arts celebration usually held in Mid July.

A more ancient celebration associated with the town is St Just Feast which is held every year to celebrate the dedication of the parish church in 13 July 1336. Feast celebrations were moved to the Sunday nearest to All Saints' Day in 1536 following an Act of Henry VIII which means it usually take place at the end of October / beginning of November. Feast itself is a two-day event with a church service and civic procession being held on Feast Sunday and a larger scale popular celebration being held on Feast Monday (which includes a meeting of the Western Hunt). A description of St Just Feast, from 1882, follows:

"Rich and poor still at this season keep open house, and all the young people from St. Just who are in service for many miles around, if they can possibly be spared, go home on the Saturday and stay until the Tuesday morning. A small fair is held in the streets on Monday evening, when the young men are expected to treat their sweethearts liberally, and a great deal of "foolish money" that can be ill afforded is often spent"

St Just has a healthy artistic scene, including the painter Kurt Jackson who has made several television appearances. Contemporary singer and comedian Jethro from nearby St Buryan played for St Just Rugby Club and has recorded a song entitled "St Just".

The folk singer Martha Tilston released an album in 2010 called Lucy and the Wolves. This features a range of songs inspired by Cornwall. The first song on the album is called The Cape and is based upon Cape Cornwall in St Just. She has performed in Penzance a number of times and now lives in Penwith.

The local community radio station is Coast FM (formerly Penwith Radio), which broadcasts on 96.5 and 97.2 FM.

St Just is twinned with Huelgoat, Bro-Gernev, Brittany. The town is also twinned, in partnership with Penzance, with Bendigo in the State of Victoria, Australia and with Nevada City in California, USA as a result of the historical links through the many people from the area who emigrated to the two destinations, mostly in the late 19th century, to find a better life in the mines there. There is still an area of Bendigo known as St. Just Point.

All content from Kiddle encyclopedia articles (including the article images and facts) can be freely used under Attribution-ShareAlike license, unless stated otherwise. Cite this article:
St Just in Penwith Facts for Kids. Kiddle Encyclopedia.