Cape Cornwall (Cornish: Kilgoodh Ust, meaning "goose back of St Just") is a small headland in West Cornwall, UK. It is four miles north of Land's End near the town of St Just. Until the first Ordnance Survey, 200 years ago, Cape Cornwall was believed to be the most westerly point in Cornwall.

The Brisons, two offshore rocks, are located approximately one mile southwest of Cape Cornwall. They mark the starting line of the annual swimming race ending at Priest Cove.

The name Cape Cornwall appeared first on a maritime chart around the year 1600. The original Cornish name, Kilgoodh Ust, has fallen out of use. In English it translates to "goose-back at St Just", a reference to the shape of the cape. An alternative name, Pen Kernow, is a recent translation back to Cornish of the English.

A cape is the point of land where two bodies of water meet. Cape Cornwall is one of only two capes in the United Kingdom, the other being Cape Wrath in Scotland.

Heinz Monument (the 1864 chimney of the former Cape Cornwall Mine visible in the centre) commemorates the purchase of Cape Cornwall for the nation by H. J. Heinz Company. The ruins of St. Helens Oratory can be seen in the left, with the two offshore rocks called The Brisons in the distance.

Pottery found in cists on the Cape have been dated to the Late Bronze Age. The presence of another cliff castle nearby (Kenidjack) may indicate that the area was important in the Iron Age. On the landward side of the Cape is the remains of the medieval St Helen’s Oratory, which replaced a 6th-century church. A font now installed in the porch of St Just church may be from this building. 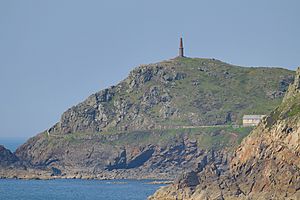 Cape Cornwall Mine, a tin mine on the cape, was operated intermittently between 1838 and 1883. The mine's 1864 chimney near the peak of the cape was retained as an aid to navigation. In the early 20th century the former ore dressing floors were for a time converted for use as greenhouses and wineries.

In 1987 the mine site was purchased by the H. J. Heinz Company of the United States (and British plants) and donated to the nation. The remains of Cape Cornwall Mine are designated as part of the Cornwall and West Devon Mining Landscape, a UNESCO World Heritage Site.

All content from Kiddle encyclopedia articles (including the article images and facts) can be freely used under Attribution-ShareAlike license, unless stated otherwise. Cite this article:
Cape Cornwall Facts for Kids. Kiddle Encyclopedia.