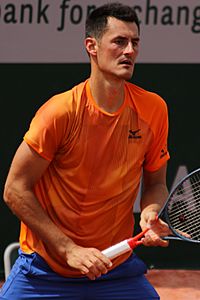 Bernard Tomic (Croatian: Bernard Tomić; born 21 October 1992) is an Australian professional tennis player. His career-high ranking was world No. 17. As a junior, Tomic had a successful career in which he won a Orange Bowl title and two junior Grand Slam singles titles, the 2008 Australian Open and 2009 US Open. He also competed at the 2012 Summer Olympics. He is well-known for his behaviour on and off the court.

Tomic was born in Stuttgart, Germany. His father is Croatian and his mother is Bosnian. He moved to the Gold Coast, Queensland, Australia in 1996. He lives in Monte Carlo, Monaco.

All content from Kiddle encyclopedia articles (including the article images and facts) can be freely used under Attribution-ShareAlike license, unless stated otherwise. Cite this article:
Bernard Tomic Facts for Kids. Kiddle Encyclopedia.