Kids Encyclopedia Facts
Not to be confused with Karara, Queensland.

Carrara is a suburb in the City of Gold Coast, Queensland, Australia. In the 2016 census Carrara had a population of 12,060 people.

Carrara was first used by the Manchester Cotton Company as a cotton plantation that began in the early 1860s.

Today the land is renowned for its golf courses and other sports facilities. No fewer than five golf courses are located in the area. In 1987 Japanese Daikyo Group worked on the $50 million Palm Meadows 18-hole golf course and country club.

The Carrara Sports Precinct will also be the main stadium of the 2018 Commonwealth Games. 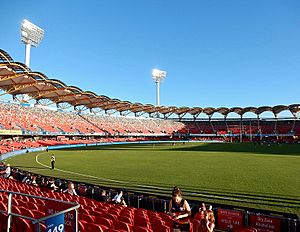 View of the field and grandstand at Carrara Stadium

The Carrara Sports Precinct consists of a number of sports facilities located on Nerang−Broadbeach Road, including Carrara Stadium and Carrara Indoor Stadium. Carrara Stadium is home to the Australian rules football club, Gold Coast Suns, competing in the AFL and the AFL Women's. The outdoor facility also serves as a secondary ground for the T20 cricket sides, the Brisbane Heat and women's team, both competing within the Big Bash and the Women's Big Bash respectively. The indoor stadium previously hosted the now defunct Gold Coast Rollers, where they competed in the National Basketball League.

Carrara is also home to the soccer team Magic United, as well as the Palm Meadows and Emerald Lakes golf courses.

The Carrara Sports Precinct was the main stadium of the 2018 Commonwealth Games, hosting sports including Athletics, Badminton, Basketball and Gymnastics throughout the duration of the tournament.

All content from Kiddle encyclopedia articles (including the article images and facts) can be freely used under Attribution-ShareAlike license, unless stated otherwise. Cite this article:
Carrara, Queensland Facts for Kids. Kiddle Encyclopedia.