The Pink Poodle facts for kids 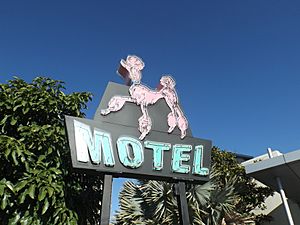 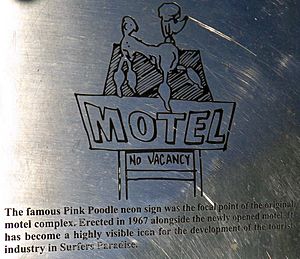 The Pink Poodle was an iconic motel in Surfers Paradise, Queensland, Australia. It was located on the corner of Fern Street and the Gold Coast Highway. Although no longer extant, its signage remains and is listed on the Gold Coast Local Heritage Register.

The Pink Poodle was built in 1967 and features a neon sign of a pink poodle. Many felt it was synonymous with the "glitzy" allure of the Gold Coast and it was frequently used as an image to depict the Gold Coast. The motel was demolished in 2004 but the sign was preserved and relocated a short distance to 18 Fern Street. A bar and restaurant in the new development that replaced it bears the name "The Pink Poodle".

In 2015, the signage appeared on a postage stamp issued by Australian Post as part of its Signs of the Times series.

In 1995, author Matthew Condon published a novel, A Night at the Pink Poodle, about the rise and fall of a Gold Coast highrise apartment salesman.

All content from Kiddle encyclopedia articles (including the article images and facts) can be freely used under Attribution-ShareAlike license, unless stated otherwise. Cite this article:
The Pink Poodle Facts for Kids. Kiddle Encyclopedia.