Advancetown is a small outer locality of City of Gold Coast in South East Queensland, Australia. It is situated in the Gold Coast hinterland. At the 2011 Census the population was 352. 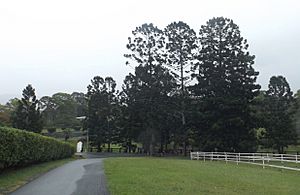 The area first attracted timber-cutters in the 1870s because of the abundant supply of good quality timber. In 1881 David Yuan established at saw mill and European settlement began. A small settlement sprang up as a rest point for the bullock teams hauling timber to the railway at Nerang. As late as the 1930s, there were still up to 24 bullock teams operating in the area.

In 1884 the first hotel was built by W. H. Turner called the Beechmont Hotel. In 1905, Ernest Belliss opened a hotel on the corner of Numinbah Road and a bullock road from Beechmont known as the Black Shoot; he called it the Advancetown Hotel. Belliss also donated land for the Advancetown school, which made the name endure. Belliss sold the hotel in March 1924 and the timber building burned down in July 1933. A new Advancetown Hotel was built and opened in February 1934.

The suburb was part of the Shire of Albert until it was amalgamated into the City of Gold Coast in 1995. 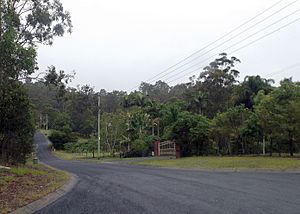 It is the location of the Advancetown Lake and Hinze Dam, which supplies water for most of the citizens of the Gold Coast.

All content from Kiddle encyclopedia articles (including the article images and facts) can be freely used under Attribution-ShareAlike license, unless stated otherwise. Cite this article:
Advancetown, Queensland Facts for Kids. Kiddle Encyclopedia.