Maitland is a city in the Lower Hunter Valley of New South Wales, Australia and the seat of Maitland City Council, situated on the Hunter River approximately 166 kilometres (103 mi) by road north of Sydney and 35 km (22 mi) north-west of Newcastle. It is on the New England Highway about 17 km (11 mi) from its start at Hexham.

At the 2011 census it had approximately 67,478 inhabitants, spread over an area of 390.2 square kilometres (151 sq mi), with most of the population located in a strip along the New England Highway between the suburbs of Rutherford and Metford respectively. The city centre is located on the right bank of the Hunter River, protected from potential flooding by a levee.

Surrounding areas include the cities of Cessnock and Singleton local government areas.

Originally Maitland was a culmination of three separate towns which arose roughly all around the same time. West Maitland, now just Maitland, was a privately founded town which grew because of its proximity to the river and which today is the commercial centre of the city. The other areas were East Maitland, which was established by the colonial New South Wales government, and Morpeth, another private town founded by Lieutenant Close, a Peninsular War veteran. Each town functioned as if they were separate municipalities.

The name, Maitland, was reported in 1885 to have had its name taken 'from Sir George Maitland, ... Under Secretary for the Colonies, and M.P. for the Borough of Whitchurch, in Hampshire, England'.

West Maitland was founded in 1820 close to the tidal reach of the Hunter River where vessels with a shallow draft could navigate. Nearby Morpeth served as the head of navigation for larger ships (later, steamships), and goods would be transhipped upriver to West Maitland on barges and smaller vessels. Originally the route river route between Morpeth and West Maitland was 26 kilometres (16 mi), today after various floods and river course changes this has reduced to just 9 kilometres (5.6 mi).

Maitland was therefore the point at which goods were unloaded for, and distributed to, the prosperous riverland of the Hunter Valley. Accordingly, there were large warehouses (some of which still exist) built, which faced onto the main High Street and backed onto the Hunter River. For almost 20 years until the Victorian gold rush, Maitland was the second largest town in Australia. The arrival of the railway from Newcastle in the 1850s, coupled with the increasing silting of the river and larger ships spelt the end of the traditional river traffic.

The first electricity connected in the area was to Maitland Town Hall in 1922, to the Hall's front light.

The first bridge to link West Maitland with what is now the suburb of Lorn was opened in 1869 and named in honour of the then Governor of New South Wales, the 4th Earl of Belmore. Although the bridge proved vital to the city's development, the floods of 1893, 1913 and 1930 began to heighten the need for a new bridge that could withstand periodic flooding. A second Belmore Bridge, designed to withstand the impact of debris during floods, was built adjacent to the 1869 bridge in 1964. The new bridge, which redirected traffic away from St. Andrews Street to a new intersection at the Maitland Court House, is one of the city's three main river crossings.

Maitland's proximity to the Hunter River has resulted in a succession of floods since European settlement. Over 200 floods have occurred on the Hunter River since settlement, 13 of those higher than the river's normal peak limit of 10.7 metres (35.1 ft). Of these 13, all have had a direct effect on the city of Maitland.

Between 1830 and 1834 Maitland experienced five floods. The 1832 flood was severe with water reaching about 8.84 m (29 ft) and killing seven people. The 1834 flood water reached the same height. In the winter of 1857 the Hunter River rose again to record heights, reaching 9.2 m (30 ft). Flooding continued for the next 30 years with the floods of the 1890s being the most disastrous. Much of the riverbank collapsed and many people were left without homes or personal possessions.

However, the 1940s and 1950s saw an increase in rainfall and the river rose again and again. In February 1955, Maitland and the Hunter Valley experienced its most severe flood in recorded history. The 1955 Hunter Valley floods, also commonly known as "The Maitland Flood", was the first Australian natural disaster to be broadcast by the media on an international scale. This flood is considered to be one of Australia’s worst floods. The waters reached 12.5 m (41 ft) and caused catastrophic damage. The volume of flood water was approximately 3,750,000 megalitres (8.2×1011 imp gal) and the cost of damage, in today’s currency, would have been over A$2 billion. Seven thousand buildings and homes were damaged and the flood claimed the lives of 14 people.

In early June 2007 an intense low pressure system which caused devastating storms to hit the city of Newcastle and the Central Coast also caused major flooding throughout the lower Hunter Region including the Maitland area. During the flooding on 11 June 2007 the Hunter River was expected to reach a peak of 11.3 m (37.1 ft) at Maitland's Belmore Bridge and break levee banks. Some 4000 residents of the suburb of Lorn were evacuated before the floodwaters became stable at 10.7 m (35.1 ft) and did not invade central Matiland. Other areas did not escape with waters inundating homes in Branxton, Louth Park and Raymond Terrace. The flood has been compared to the devastating 1955 Hunter Valley floods.

From 20 to 22 April 2015, heavy rainfall in the Hunter, Central Coast and Sydney regions of New South Wales resulted in flash flooding and extended power outages to over 200,000 homes. Maitland was badly affected and the flood gates at Maitland railway station reinforced with sandbags to prevent flooding in central Maitland. Four people died as a result of the storms and a further four died in traffic related incidents. The towns of Dungog and Gillieston Heights, the homes of the four flood victims, were also badly affected, becoming isolated from other communities.

Flooding along the Maitland riverfront during the 2007 flood 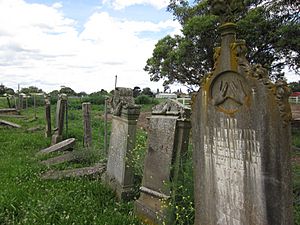 The motif of outstretched hands can be found on memorials to the priest's family in Maitland's Jewish Cemetery.

The Maitland Jewish Cemetery in Louth Park, one of only two provincial Jewish cemeteries in New South Wales, is testament to the Jewish community that was active in Maitland up until the 1930s. Between about 1846 and 1934, 53 Jews were buried in the low-lying cemetery. Burials ceased after this time due to dissipation of the community and the cemetery being full. One exception was Lea Abadee in 2010. The city's former synagogue, located on Church Street, was the place of worship for about 70 families between 1879 and 1898.

Maitland has a warm temperate climate with hot summers and mild winters. It gets 90.3 clear days, annually.

Opening of the Maitland tramway in 1909

Maitland railway station lies on the Hunter line and is the branch point for the Main North Line and the North Coast Line. Other railway stations in Maitland include:

A passenger tram system ran from East to West Maitland between 1909 and 1926 after which it was replaced by buses which continue to service the route today.

Maitland Airport is a general aviation airfield located beside the New England Highway in Rutherford. Construction was started in 1948 by the now-defunct Maitland Aero Club. In 1957, operation of the airfield transferred to the Royal Newcastle Aero Club (RNAC), which moved from Broadmeadow Aerodrome, its original base of operations, in 1963.

Hunter Valley Steamfest is an annual festival celebrating the history of steam power and industry in the Maitland area. It was established in 1986 in response to the closure of the last coal operated steam hauled freight service on the South Maitland Railway network in 1983.

Bitter & Twisted is an annual international boutique beer festival held at historic Maitland Gaol. It is a celebration of beer, food and music.

ChapelJazz is an annual music festival held at the popular historic riverside port of Morpeth. It is a celebration of music, wine and food.

Groovin' the Moo is an annual music festival held at the Maitland Showground since 2006.

Maitland is generally accepted to be the birthplace of Motorcycle speedway when New Zealand born promoter Johnny S. Hoskins organised a series of motorcycle races at the West Maitland Showground on Saturday, 15 December 1923.

All content from Kiddle encyclopedia articles (including the article images and facts) can be freely used under Attribution-ShareAlike license, unless stated otherwise. Cite this article:
Maitland, New South Wales Facts for Kids. Kiddle Encyclopedia.