Singleton is a town on the banks of the Hunter River in New South Wales, Australia. Singleton is 197 kilometres (122 mi) north-north-west of Sydney, and 80 kilometres (50 mi) northwest of Newcastle. At June 2015, Singleton had an urban population of 16,921.

Singleton is located on the north-eastern part of the geological structure known as the Sydney basin, which borders the New England region.

Singleton was established in the 1820s by John Howe. In its early years, it was also called Patrick's Plains. The Main Northern railway line reached Singleton in 1863 and was the end of the line until 1869. The town retains many historic buildings, including the original court house built in 1841, various large churches and many traditional Australian pubs. The countryside surrounding Singleton contains an unusual number of fine old mansions, reflecting the aristocratic nature of land grants when the area was settled. They include 'Neotsfield' (1828), the elaborate 'Baroona' (1829), 'Abbey Green' (1865) and stunning 'Minimbah' (1877).

Singleton was subject to the major flooding of the Hunter River in 1955, causing extensive damage to the town. When the area was being settled, the government originally attempted to create a town at Whittingham in a flood-free area, but the town grew by the river nonetheless. An embankment was constructed following the 1955 floods to help protect the town against any future flooding.

The town is located at the junction of the New England Highway and Putty Road. The Golden Highway branches northwest from the New England Highway ten kilometres south of Singleton. Singleton is also served by local and long-distance rail services. Singleton railway station on the Main Northern railway line is located at the southern end of the town centre. There are also bus services, both intercity and local. 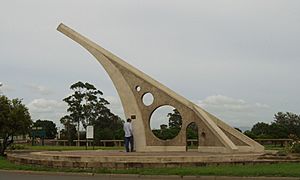 One of the world's largest sundials, Singleton

All content from Kiddle encyclopedia articles (including the article images and facts) can be freely used under Attribution-ShareAlike license, unless stated otherwise. Cite this article:
Singleton, New South Wales Facts for Kids. Kiddle Encyclopedia.