Cessnock is a city in the Hunter Region of New South Wales, Australia, about 52 km (32 mi) by road west of Newcastle. It is the administrative centre of the City of Cessnock LGA and was named after an 1826 grant of land called Cessnock Estate, which was owned by John Campbell. The local area was once known as "The Coalfields", and it is the gateway city to the vineyards of the Hunter Valley, which includes Pokolbin, Mount View, Lovedale, Broke, Rothbury, and Branxton.

The transition to wine service centre from a once prosperous mining town has been a long and at times difficult process.

Cessnock lies between Australia’s earliest European settlements – Sydney, the Hawkesbury River and Newcastle. Lying on the land route between these important settlements it provided early European contact with indigenous people who have inhabited the Cessnock area for more than 3,000 years. The Wonnarua people were the major inhabitants at the time of European contact, which subsequently proved to be disastrous for the Wonnarua tribe. Many were killed or died as a result of European diseases. Others were forced onto neighbouring tribal territory and killed. The city of Cessnock abounds in indigenous place names and names with indigenous association which is indicative of this settlement and include Congewai, Kurri Kurri, Laguna, Nulkaba and Wollombi.

Pastoralists commenced settling the land in the 1820s. Cessnock was named by Scottish settler John Campbell, after his grandfather's baronial Cessnock Castle in Galston, East Ayrshire, to reflect the aristocratic heritage and ambitions for this estate. The township of Cessnock developed from 1850, as a service centre at the junction of the Great North Road from Sydney to the Hunter Valley, with branches to Maitland and Singleton.

The establishment of the South Maitland coalfields generated extensive land settlement between 1903 and 1923. The current pattern of urban development, transport routes and industrial landscape was laid at this time. The surveying of the Greta coal seam by Professor Edgeworth David around 1888 became the impetus for considerable social and economic change in the area with the development of the coal mining industry.

The town is located in the rich alluvial and volcanic soils of the Hunter Valley. Rich coal seams underlie much of the area. to the north. Cessnock lies within the Hunter Valley Important Bird Area.

For a century Cessnock was served by the South Maitland Railway network, originally constructed for the coal industry, but which, at one time, had considerable passenger services, including a direct train to Sydney known as the Cessnock Flyer.

The Sydney-Newcastle Freeway's Cessnock exit at Freemans Waterhole provides one of the main road connections from Sydney to Cessnock via "The Gap", a pass through the Watagan Mountains range just north of Mount Heaton.

Until the Hunter Expressway opened in 2014, linking the New England Highway at Branxton and the Sydney-Newcastle Freeway at West Wallsend, through traffic passed through Cessnock.

The local airport is placed just to the north of the city, at the entrance to the Vineyard District. It has a small public passenger terminal and also serves as the base for aviation training organisations such as Avondale College's school of Aviation and Hunter Valley Aviation. The airport is not served by RPT flights. Access by air to the region is by Newcastle Airport at Williamtown, 53 km (33 mi) away.

The local bus service is run by Rover Coaches which provide services to Maitland, Newcastle and Morisset and school bus services. 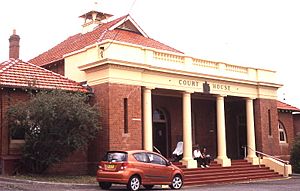 Greater Cessnock contains a number of buildings and sites that are on the Register of the National Estate. 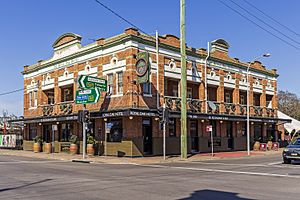 The decline of mining on the South Maitland Coalfields has been paralleled by growth in the wine industry and better access to other employment centres.

The Hunter Valley wine-growing area near Cessnock is Australia's oldest wine region and one of the most famous, with around 1,800 hectares (4,448 acres) under vine. The vineyards of Pokolbin, Mount View and Allandale, with their rich volcanic soils tended by entrepreneurial vignerons, are also the focus of a thriving and growing tourism industry. The extension and eventual completion of the F3 Freeway, created a property and tourism boom during the 1990s.

Cessnock has begun to develop other tourist ventures beyond the wine industry such as championship golf courses, hot air ballooning, sky-diving, and guest house accommodation.

The city council has actively pursued a policy of urban renewal in the city centre since 2001. The local council was one of the first to introduce a recycling program for waste disposal in the state.

Most employment comes from the local port city of Newcastle, the nearby major centres of Maitland and Singleton and in service industries in the local council area, which comprises many small towns, such as Kurri Kurri, Weston, Neath, Abernethy, Kearsley and Pokolbin. 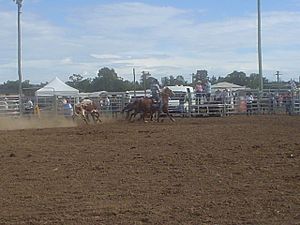 The city has many sporting facilities. The city competes in several regional sporting competitions, particularly the Cessnock Goannas competing in Newcastle-based rugby league competition. Some very successful sporting players can trace their roots to the local district, including Australian Rugby League representative players and brothers Andrew and Matthew Johns. World-renowned golfer and TV commentator Jack Newton is also from Cessnock. His annual Sub-Juniors Golf Tournament has unearthed some talented young golfers and is held on the local championship courses of Pokolbin. Cessnock was the base camp for the Japanese national football team during the 2015 AFC Asian Cup.

All content from Kiddle encyclopedia articles (including the article images and facts) can be freely used under Attribution-ShareAlike license, unless stated otherwise. Cite this article:
Cessnock, New South Wales Facts for Kids. Kiddle Encyclopedia.