Kurri Kurri was founded in 1902 to service the local Stanford Merthyr and Pelaw Main collieries and mining communities. The town was named by District Surveyor T. Smith who chose the name because he believed it meant 'hurry along' in a local dialect.

The Kurri Kurri Hotel (1904) is one of several built during the era of mining prosperity in the early 20th century. It is an impressive three-story building featuring prominent verandas with cast-iron lacework. The Empire Tavern was also built during this period. Kurri Kurri has numerous small miners' cottages from the same period.

Mining at the South Maitland Coalfields began at East Greta in 1891, after an 1886 exploration by Sir Edgeworth David, a government geological surveyor, uncovered the potential of the Greta coal seam. More mines were opened in the early 1900s, supplanting those older pits at Newcastle where the Australian Agricultural Company enjoyed almost a monopoly. During this period there were a number of accidents including the death of six miners at the Stanford Merthyr Colliery in 1905, which is commemorated by a monument in the Kurri Kurri cemetery.

Richmond Main Colliery, also in the Kurri Kurri vicinity, was once the State's largest producer, at 3,400 tons per day, and which reputedly had the deepest shaft permitting access to two separate coal seams, the Scholey shaft, named after its founder, John Scholey. Following the serious slump in the coal industry Stanford Merthyr Colliery closed in 1957, Pelaw Main in 1962, and Richmond Main in 1967.

The power station at Richmond Main Colliery, which provided the electricity for Kurri Kurri and surrounding districts, remained in operation for some years after the mine's closure, until the entire district was attached to the National Grid.

In 1988 the town established a Tidy Town Committee under the stewardship of the Keep Australia Beautiful competition. The town achieved immediate success and in the space of 6 years took the best town in NSW in 1993 and was a finalist in the best town in Australia.

This was followed by the establishment of the Small Towns committee known as Towns with Heart.

It is now becoming internationally renowned for its murals with more than 55 murals painted around the town and its environs depicting the history of the region and also recent events. Each year the town also hosts a Nostalgia Festival featuring rock 'n' roll dancing, hot rod and bike shows.

Retired Newcastle Knights Rugby league player Andrew Johns spent his childhood in Kurri Kurri, before moving to Cessnock. He would later play in the Kurri Kurri Under-16's side, as Cessnock was unable to field a team. Kurri Kurri is also noted as having produced more Rugby League internationals than any other bush town in Australia. 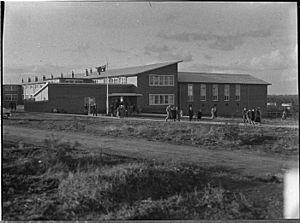 All content from Kiddle encyclopedia articles (including the article images and facts) can be freely used under Attribution-ShareAlike license, unless stated otherwise. Cite this article:
Kurri Kurri, New South Wales Facts for Kids. Kiddle Encyclopedia.