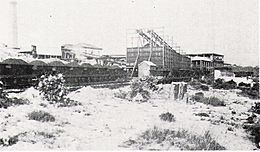 Pelaw Main is a hamlet a few kilometres south-west of Kurri Kurri, in the Hunter Region of New South Wales, Australia. It owes its origins entirely to the colliery there of the same name. It had a population of 1,027 in 2011

About 1900 the coal mining firm of J & A Brown purchased the leasehold of the proposed Stanford Greta No. 2 Colliery from the East Greta Coal Mining Company and soon afterwards changed the name of the property to Pelaw Main. By 1901 they had driven two tunnels into the 17 foot seam of coal there. They then constructed a railway extension westwards from the terminus of the South Maitland Railways branch line at Victoria Street, Stanford Merthyr, to Pelaw Main, a distance of about one mile, which opened for traffic on 17 November 1901.

A brick-faced passenger platform was built at Reception Road, Pelaw Main, but passenger traffic ceased in 1932 with the scaling down of the branch from Aberdare Junction on the South Maitland Railways coupled with the fact that from 1918 coal from the Stanford Merthyr Colliery was being transported via the Richmond Vale Railway. In addition, the SMR branch was abandoned altogether by 1940 following major subsidence beneath it, leaving the Richmond Vale Railway to service fully Stanford Merthyr and Pelaw Main.

Pelaw Main Colliery was a major concern and large employer. By 1902 there were four coal loading 'roads' which accommodated sufficient wagons to hold 4000 tons of coal at any one time. Richmond Vale Railway was extended to form a main link, past the South Maitland Cemetery, to the South Maitland Railways at Weston Exchange Sidings near the eastern end of Weston Railway Station, the link being completed in 1936. This meant that in the unlikely event that the Richmond Vale Railway was blocked an alternative route for coal trains was available. The link was occasionally used when flooding blocked one, but not both rail lines-it was rare for both lines to be blocked at the same time.

Pelaw Main Colliery closed in 1962 owing to the major coal industry slump at that time.

Pelaw Main has not changed much since the closing of the colliery. The population stays fairly small, recorded at 836 people in 2006 (a 1% growth since the 2001 census). The town had a small general store, but it has since closed. Most shopping is now done in nearby Kurri Kurri.

It also has a primary school, which was established in 1903. Most of the students continue education in Kurri Kurri High School, while others may enrol in one of the high schools closer to Cessnock.

All content from Kiddle encyclopedia articles (including the article images and facts) can be freely used under Attribution-ShareAlike license, unless stated otherwise. Cite this article:
Pelaw Main, New South Wales Facts for Kids. Kiddle Encyclopedia.