Gillieston Heights is a suburb of the City of Maitland local government area in the Hunter Region of New South Wales, Australia, approximately 5.1 km (3.2 mi) from the Maitland CBD. Prior to 1967, the village was named East Greta however this was changed to honour former Maitland mayor and member of the New South Wales Legislative Assembly John Gillies following a poll of residents. At the 2016 census, Gillieston Heights had a population of over 3,000.

Following the discovery of high quality coal by prospector T.W. Edgeworth David in 1888, a group of local businessmen purchased 245 acres (99 ha) of land surrounding present-day Gillieston Heights and were within weeks able to produce coal which was transported by dray to Maitland for sale. To capitalise on this success, the East Greta Coal Mining Company was established in 1891. The company constructed a railway line from West Maitland to the East Greta colliery, completed in 1893. Orders to supply coal for power companies in Sydney, Melbourne and Bundaberg saw the company declare a dividend in 1896 and expand its operations, sinking a second mine shaft the same year. 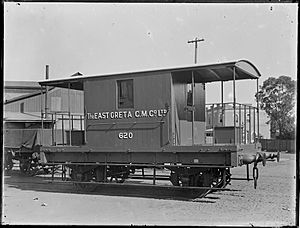 As the coal mining activities in the area were expanded, the railway line from Maitland was extended further to the south, and a station platform was opened at East Greta in 1902, with passenger services to Stanford Merthyr near the town of Kurri Kurri. Initially, passengers had to walk to Maitland railway station to connect with trains operated by New South Wales Government Railways, but in 1903 this service was extended to Maitland, and a year later to Cessnock on the newly extended South Maitland Railway. Mining operations at the East Greta colliery ceased following a miners strike in 1929 and subsidence caused by floods in 1930s damaged the workings. With the closure of the mine, rail services also ceased, while the village consisting of permanent dwellings which had been erected to house miners remained.

Since 2005, Gillieston Heights has experienced rapid population growth, with large residential developments approved as part of the Maitland City Council's urban settlement strategy. The population doubled between 2005 and 2011, with the rapid growth placing pressure on Gillieston Public School, leading to the acquisition of more land for future expansion.

Gillieston Heights is served by Rover Coaches route 164 to Cessnock and Maitland. The rapid population growth in the suburb and other former mining villages in the area has led to calls by Maitland and Cessnock councils to reinstate passenger services on the South Maitland Railway, connecting to Newcastle to ease congestion on regional roads. A new station at Gillieston Heights has been identified as a priority.

All content from Kiddle encyclopedia articles (including the article images and facts) can be freely used under Attribution-ShareAlike license, unless stated otherwise. Cite this article:
Gillieston Heights Facts for Kids. Kiddle Encyclopedia.