Raymond Terrace is a town in the Hunter Region of New South Wales, Australia, about 26 km (16 mi) by road north of Newcastle on the Pacific Highway. Established in 1837 it is situated at the confluence of the Hunter and Williams rivers. The town was named after Lieutenant Raymond, who had explored the Hunter River in 1797 and described the terraced appearance of trees in the area. Governor Lachlan Macquarie camped in the area in 1818, using "Raymond Terrace" as the name for the place where his party had camped.

At the 2011 census Raymond Terrace had a population of 12,725. It is the administrative centre of the Port Stephens local government area as well as a service hub for surrounding rural areas.

Raymond Terrace is situated to the east of the Hunter and Williams rivers and consists of three distinct regions. The north and south regions are primarily rural/semi-rural and occupy approximately 74% of the town's land with only 3% of the population living in these areas. Most of the population lives in the town itself. 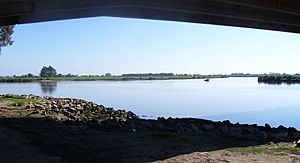 Confluence of the Hunter and Williams rivers

The centre of the town, where the shopping district is located, is adjacent to the Hunter River, just south of the confluence of the two rivers. Access to the northern sides of the rivers is via the Fitzgerald bridge which crosses the Williams River immediately adjacent to and upstream of the confluence. When the Hunter River is in flood, access beyond the Fitzgerald Bridge to the northern side of the Williams River (i.e. to Nelsons Plains) is often not possible due to its low-lying nature. The town of Raymond Terrace is mostly protected by levee banks and other flood mitigation devices. However, some lower parts of the town still flood, as happened during the June 2007 Hunter Region and Central Coast storms.

All emergency service providers are represented in the town. In 2010 the police station was temporarily relocated to the site of the old Raymond Terrace Leisure Centre while a new station was being constructed on the site of the old station in William Street. The fire station is located at the eastern edge of the town in Leisure Way, adjacent to Grahamstown Dam, while the ambulance station is located on Adelaide St (old Pacific Highway), a short distance from the centre of the town. The NSW Rural Fire Service and State Emergency Service (SES) share a facility located North of the town between Rees James Road and the Pacific Highway. The nearest hospitals are the Calvary Mater and John Hunter hospitals in Newcastle to the southwest and Maitland Hospital in Maitland, to the northwest. All three are approximately 20–30 minutes driving time from the town.

Raymond Terrace is served by Hunter Valley Buses who operate both a town service and a service to Newcastle station. Hunter Valley Buses (then trading as Blue Ribbon) operated a depot in Richardson Road until it was closed in 2000 with operations transferred to Thornton. Port Stephens Coaches operate services to Nelson Bay and Sydney. NSW TrainLink road coaches services from Newcastle station to Taree call at Raymond Terrace. 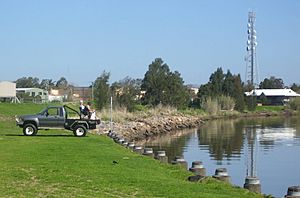 There are several competitive sporting teams based in the Raymond Terrace area. The Raymond Terrace Magpies are the town's local Rugby League team, participating in the Newcastle Rugby League Competition. The town is represented in cricket by the Lions, a club that participates in the Maitland District Cricket Two Day Competition, and the Port Stephens Pythons (originally a club founded by members of the Port Stephens Shire Council, which is located in Raymond Terrace), that competes in the Maitland District Cricket One Day Competitions. Both teams play side by side at the King Park Sporting Complex and are renowned for having some of the best teams and players in the region. Other popular sports within the town are soccer, netball, athletics, golf and lawn bowls. There are two licensed clubs, Muree Golf Club and The Raymond Terrace Bowling Club, as well as a number of public bars. The majority of the sporting fields are located near the centre of town, on land that runs along the Williams and Hunter Rivers with other sporting fields located in the suburb of Lakeside, adjacent to Grahamstown Dam.

There is a boat ramp adjacent to the Fitzgerald Bridge, which crosses the Williams River, and the area is popular with water skiers and fisherpeople.

Fitzgerald Bridge over the Williams River

Tomorrow, When the War Began 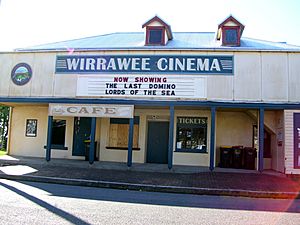 In June 2009, Screen Australia announced that it would fund the development of the feature film Tomorrow, When The War Began, based on the John Marsden novel of the same name. Raymond Terrace was chosen as a major location for producing the film as it is "a great country town". Historic King Street, the former main street of the town, was transformed from a normally quiet location into Main Street, Wirrawee. The street began its transformation in September 2009. Set areas included the "Wirrawee Cinema" and the Lee family's Thai restaurant. Filming began in King Street on 21 October 2009 and continued until 27 October 2009. Filming in other locations in the town ended on 6 November 2009.

All content from Kiddle encyclopedia articles (including the article images and facts) can be freely used under Attribution-ShareAlike license, unless stated otherwise. Cite this article:
Raymond Terrace Facts for Kids. Kiddle Encyclopedia.