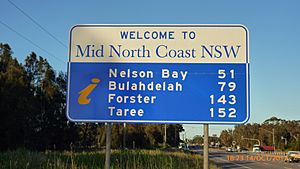 Although entirely geographically in the Hunter Region, Port Stephens is also considered to be part of the Mid North Coast as demonstrated by this sign, only 900 m (2,953 ft) north of the Hunter River. 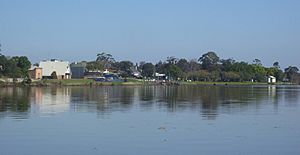 Raymond Terrace, located at the confluence of the Hunter and Williams rivers, is the largest town and administrative centre of Port Stephens Council. 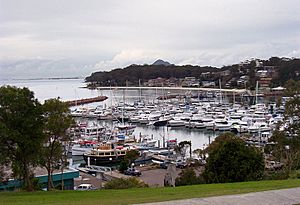 Port Stephens Council (also known simply as Port Stephens) is a local government area in the Hunter Region of New South Wales, Australia. The area is just north of Newcastle and is adjacent to the Pacific Highway which runs through Raymond Terrace, the largest town and Council seat. The area is named after Port Stephens, which is the major geographical feature of the area. It extends generally from the Hunter River in the south, to near Clarence Town in the north, and from the Tasman Sea in the east, to just south of Paterson in the west. The mayor of Port Stephens Council is Ryan Palmer. Port Stephens is about two and a half hours north of Sydney.

Most of the population is concentrated in Raymond Terrace and its satellite suburb of Heatherbrae or around or near the shores of Port Stephens in the suburbs of Anna Bay, Boat Harbour, Corlette, Fingal Bay, Fishermans Bay, Karuah, Lemon Tree Passage, Mallabula, Nelson Bay, One Mile, Oyster Cove, Salamander Bay, Shoal Bay, Soldiers Point, Swan Bay, Tanilba Bay and Taylors Beach. However, another significant portion of the population lives in a large rural/semi-rural area to the west of the Pacific Highway in the towns and suburbs of Balickera, Butterwick, Duns Creek, Eagleton, East Seaham, Glen Oak, Hinton, Nelsons Plains, Osterley, Seaham, Wallalong and Woodville and in the predominantly residential estate of Brandy Hill.

In the southern part of the area are the rural communities of Bobs Farm, Fern Bay, Fullerton Cove, Salt Ash, Tomago and Williamtown. Tomago supports both rural and industrial communities while Williamtown is the location for a Royal Australian Air Force base that shares its airfield with Newcastle Airport.

At the northern end of the area are Karuah and Twelve Mile Creek. Located adjacent to Port Stephens and straddling the Karuah River, Karuah is predominantly residential. It is the location of the largest Aboriginal community in the area. Twelve Mile Creek is almost exclusively rural.

Centrally located in the area, between Raymond Terrace and Port Stephens are Campvale, Ferodale and Medowie. Ferodale is dominated by Grahamstown Dam, a man-made dam with a capacity of 131,800 megalitres (4,650×10^6 cu ft) that is a major source of fresh water in the region. The remainder of this area is a mix of rural, semi-rural and residential developments.

A 2015 review of local government boundaries by the NSW Government Independent Pricing and Regulatory Tribunal recommended the merger of a number of adjoining councils. In the initial proposal, Port Stephens Council was not included in any amalgamation proposals. However, after Lake Macquarie City Council successfully avoided a proposed merger between it and Newcastle City Council, the Minister for Local Government subsequently proposed that Newcastle City Council instead merge with Port Stephens Council to form a new council with an area of 1,045 km2 (403 sq mi) and support a population of approximately 230,000.

The proposed merger has been met with significant opposition. Thousands of residents have attended rallies and signed petitions opposed to the proposal, while 470 have attended public inquiry meetings. The state member for Port Stephens, Kate Washington, former state member Craig Baumann and broadcaster Alan Jones have all publicly expressed their opposition. Federal Liberal member for Paterson, Bob Baldwin, spoke in parliament, urging the Liberal Baird government to reconsider the proposal, claiming "this proposal seems to defy logic". Port Stephens Council claims that 93% of residents surveyed were opposed to the merger, and included the results of its community survey in its submission to the delegate responsible for evaluating the merge. In response to the government's proposal, Port Stephens Council has formally asked the government to evaluate a merger between Port Stephens and Dungog Shire. Although the Dungog Shire mayor is opposed to this merger, it is reported that the proposal has community support within both local government areas. The proposal was debated in the New South Wales parliament on 23 March 2016, with the Minister for Local Government confirming that the proposal had been referred to the Office of Local Government.

On 14 February 2017, the NSW Government announced it would not be proceeding with further regional council mergers, including the Newcastle City Council and Port Stephens Council merger.

Port Stephens Council covers an area of 979 square kilometres (378 sq mi), stretching approximately 57 kilometres (35 mi) from east to west and approximately 30 km (19 mi) from north to south, and experiences various climatic conditions throughout the LGA. These are monitored by five weather stations, four of which are located at the approximate cardinal points of the area, operated by the Bureau of Meteorology. The fifth station is located on RAAF Base Williamtown. The following tables indicate average climatic data throughout the area.

Port Stephens has sister city relationships with the following cities: 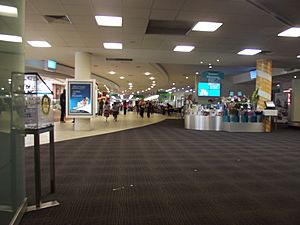 Newcastle Airport, also known as Williamtown Airport, is located in the Port Stephens suburb of Williamtown. It is the 12th busiest airport in Australia. The airport has direct flights to Brisbane, Melbourne, Ballina, Canberra, Dubbo, Gold Coast, Sydney and Taree. It is served by Virgin Australia, QantasLink, FlyPelican, Jetstar and Rex Airlines.

All content from Kiddle encyclopedia articles (including the article images and facts) can be freely used under Attribution-ShareAlike license, unless stated otherwise. Cite this article:
Port Stephens Council Facts for Kids. Kiddle Encyclopedia.