Port Stephens is formed through the confluence of the Myall and Karuah rivers, Tilligerry Creek, and the Tasman Sea of the South Pacific Ocean. The lower port has a predominantly marine ecology and the upper port an estuarine ecology. The area to the east of Port Stephens comprises the Tomago/Tomaree/Stockton sand beds.

A narrow entrance between two striking hills of volcanic origin marks the opening of Port Stephens to the sea. The southern headland, Tomaree or South Head, rises to 161 metres (528 ft) above mean sea level (AMSL) while Yacaaba, the northern headland, is 210 m (690 ft) AMSL. The harbour is mostly shallow and sandy but contains sufficient deep water to accommodate large vessels. After its recovery from the wreck site in 1974 the bow of the MV Sygna, a 53,000 tonnes (52,163 long tons) Norwegian bulk carrier that was shipwrecked on Stockton Beach earlier that year, was moored in Port Stephens, at Salamander Bay, for almost two years.

With an area of approximately 134 square kilometres (52 sq mi), Port Stephens is larger than Sydney Harbour. Port Stephens extends approximately 24 km (15 mi) inland from the Tasman Sea and at its widest point, between Tanilba Bay and Tahlee, it is 6.5 km (4 mi) across. The narrowest point is between Soldiers Point and Pindimar where the distance is only 1.1 km (0.7 mi). Between Nelson Bay and Tea Gardens, in the most well known section of the port, it is 3.8 km (2.4 mi) wide.

The southern shore of the port is divided into two distinct areas known as the Tomaree and Tilligerry peninsulas. These are separated by Tilligerry Creek, a watercourse covering approximately 7.7 km2 (3.0 sq mi), which drains the land in the low-lying areas of Salt Ash, Bobs Farm, Tanilba Bay and Mallabula. While the Tilligerry Peninsula is geographically closer to major centres such as Sydney and Newcastle, it lacks the urban development that has occurred on the much larger (25 km2 (10 sq mi) vs 115 km2 (44 sq mi) respectively) Tomaree peninsula. Although Lemon Tree Passage, on the Tilligerry Peninsula, and Soldiers Point, on the Tomaree Peninsula, are only 2.9 km (1.8 mi) from each other, physical separation of the suburbs by Port Stephens and Tilligerry Creek results in them being almost 40 km (25 mi) from each other by road.

The town of Karuah, located at the north-western corner of the port near the mouth of the Karuah River, experiences similar geographical separation from the Tilligerry Peninsula. Despite being only 7.7 km (4.8 mi) from Tanilba Bay, the road distance between the two suburbs is 40 km (25 mi). 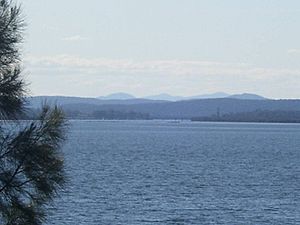 The port was named by Captain Cook when he passed by on 11 May 1770, honouring Sir Philip Stephens, who was Secretary to the Admiralty. Stephens was a personal friend of Cook and had recommended him for command of the voyage. It seems Cook's initial choice had actually been Point Keppel and Keppel Bay, but instead he used Keppel Bay later.

The first ship to enter the port was the Salamander, a ship of the Third Fleet that later gave the suburb of Salamander Bay its name, in 1791. In that same year escaped convicts, then known as 'bolters', discovered coal in the area.

In 1795 the crew of HMS Providence discovered a group of escaped convicts, living with the Worimi people. Port Stephens became a popular haven for escaped convicts and so in 1820 a garrison of soldiers was established at what is now known as Soldiers Point.

The 63-tonne (62-long-ton) cutter Lambton, commanded by Captain James Corlette, began shipping timber and wool out of the port in 1816. The suburb of Corlette was named after the captain.

Port Stephens has rather poor soil for the most part, and has limited agricultural potential. For this reason, no large towns developed there historically and it was never developed as a significant port. The major city and port of Newcastle developed at the mouth of the Hunter River, about 45 km (28 mi) south-west of Port Stephens. 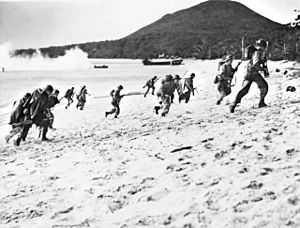 Despite this, in 1920 there was a push for Port Stephens to be the capital city of a new state in a proposal originating from the country newspaper The Daily Observer. The proposal was the Observer's editor Victor Charles Thompson's idea in response to continuing rural Australian antipathy at the Sydney-centralised funding and governance that many rural newspapers claimed had neglected to aid rural Australian towns.

During World War II, the remoteness and lack of any significant civilian population led to the Royal Australian Navy establishing HMAS Assault, an amphibious landing training establishment, at Nelson Bay. The sick bay from HMAS Assault still stands and is used by the Port Stephens Community Arts Centre.

A number of small towns developed around the port as fishing, holiday and retirement communities. Since the 1970s, with improved road access from Sydney, and the increasing popularity of coastal retirement lifestyles, there has been major expansion of these towns.

On 1 December 2005 the Port Stephens-Great Lakes Marine Park was established pursuant to the . The park comprises approximately 97,200 hectares (240,000 acres) and includes all of Port Stephens, the Karuah and Myall rivers and all their creeks and tributaries under tidal influence. The park was established to protect the wide variety of sea life that inhabit the port and nearby coastal areas of the Tasman Sea from just south of Forster to the northern end of Stockton Beach.

Examples of some of the sea life that inhabits Port Stephens 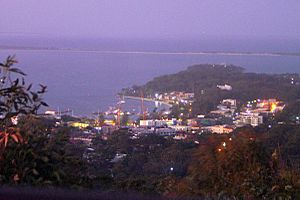 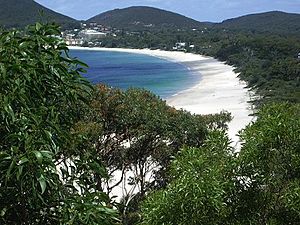 At the time of the 2006 Census, more than 85% of the population around Port Stephens resided in towns and suburbs that have developed on or near the southern shores of the port. More than 22,188 people live within 3 km (1.9 mi) of the port in the suburbs of Corlette, Lemon Tree Passage, Mallabula, Nelson Bay, Oyster Cove, Salamander Bay, Shoal Bay, Soldiers Point, Tanilba Bay and Taylors Beach. Another 5,343 people live in other suburbs on the Tomaree peninsula that are within 10 km (6 mi) of Port Stephens. These suburbs include Anna Bay, Boat Harbour, Bobs Farm, Fingal Bay, Fishermans Bay and One Mile.

Most urban development to the south of Port Stephens has occurred on the Tomaree peninsula in the suburbs of Corlette, Nelson Bay, Salamander Bay, Shoal Bay and Soldiers Point.

On the western shore is the suburb of Swan Bay, a small community of around 100 persons. The main industry in the area is oyster farming, however a small tourist resort is located near the mouth of Twelve Mile Creek. Karuah township, which has a population of 857, is at the north-western corner of the port, at the mouth of the Karuah River.

Port Stephens is a popular tourism destination with a strong focus on aquatic activities such as whale and dolphin watching, fishing and recreational boating and swimming.

All content from Kiddle encyclopedia articles (including the article images and facts) can be freely used under Attribution-ShareAlike license, unless stated otherwise. Cite this article:
Port Stephens (New South Wales) Facts for Kids. Kiddle Encyclopedia.